I was mean girled by my own daughter

What Would You Do if Your Daughter Said This to You?

We are heading to the Keys for a week-long vacation soon, and so I loaded the kids to head over to Target for the dreaded bathing suit purchase. Can we all agree that fitting rooms are awful? The lighting makes me look like an eskimo, the three-paneled circus mirrors make my stretch marks look like deflated balloons, and the super thin partition walls make it easy for everyone to hear me crying.

The experience simply can't be worse

I shoved the kids into the family-sized fitting room and gave them my phone to play with while I tried on a few swim suits. I had just gotten one on when my daughter Gracie casually looks up from the game she was playing on my phone and says to me, "You look ugly without your clothes on." And then she went right back to playing her game, as if nothing had happened.

As if she hadn't kicked me in the gut that I still try to blame on baby weight, even though my kids are in elementary school.

As if she hadn't knocked all the air out of my sagging chest.

As if she hadn't mean girled me in those super thin partitioned walls, ensuring that every other woman in there heard my shame.

I have pretty thick skin, but there is not enough thick skin in the world to prepare you for standing in an ill-fitting, cheap mom tankini in a fluorescent lit fitting room while someone criticizes your body.

I put my incredibly hurt feelings aside and immediately went into parenting mode. I snatched my phone away from Gracie and got down on her level and said in my most serious voice, "We do not talk to people like that, Gracie. That hurts my feelings. I would never say something mean like that to you. You need to apologize to me."

To her credit, Gracie seemed to immediately realize she had broken some kind of unspoken girl code, and her eyes welled up and she apologized. I wanted to continue rubbing her face in it until I felt better about myself, but I resisted and instead took off the bathing suit, put it back on it's hanger, and we left.

I don't know which bothered me more about that moment - that I felt ashamed and embarrassed of my body or that Gracie was capable of saying something so mean without any remorse. I've gotten over the hurt feelings. In fact, I bought myself a super cute bathing suit. And I'm going to wear it proudly and confidently.

As for Gracie, I talked to her later that night as I tucked her into bed. I explained to her that all bodies are different shapes and sizes and that speaking unkindly to someone about the way that they look is very hurtful to others. We talked about what nice things we can say to people to make them feel good about themselves and about what other people have said to us at different points that made us feel good. I'm sure the talk could have veered down the "it's what's inside that counts" path, but I really wanted Gracie to understand that words have the power to hurt others. We can focus on the body image another day.

But you know what's not hard? Being kind. Saying kind things to other women and girls. Making people feel good about themselves. And that's a lesson I want my daughter to learn.

Editor's note: This article was originally published on Katie Brown's website, Marriage Confessions. It has been republished here with permission.

Katie Brown is the author of the award-winning family and parenting blog, ​Marriage Confessions​. Her works have been featured in publications such as ​Newsweek​, ​Southern Weddings Magazine​, ​TheKnot​, ​Family Circle,​ ​SheKnows Media, ​and ​The​ ​Huffington Post. She is married to her high school sweetheart, is the mother of two, and is a middle school language arts teacher. She enjoys long naps, burning baked goods, getting lost in Target, and Girl Scout cookie season. You can find Katie on ​Facebook​, ​Twitter,​ and ​Instagram​.
nextarticle 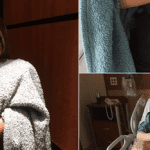 Woman Sneaks into the Hospital Holding Something That…