In 2016, parents help their children find their future spouse

Korean American Parents Don't Want Their Children to Rely on Dating Apps to Find Love, so They're Doing a Bulk of the Work For Them.

Korean American parents don't want their children to rely on dating apps to find love, so they're doing a bulk of the work for them.

As The Los Angeles Times reported this week, Koreans in California communities have taken extra steps to help their youngsters find love by engaging in community events where they pitch their bachelor or bachelorette to other parents who have single children.

The events often start with parents explaining to a large audience who their child is, what his or her hobbies are, and what they're looking for in a spouse. The audience members will then select which of the proposed singles best fits their own eligible single and write it down.

"The result is a cross between a business pitch meeting, speed dating and bingo night," according to The Los Angeles Times. "Each parent, and in a few cases the children themselves, gives a two-minute introduction, laying out the bachelor's or bachelorette's age, profession, education, hobbies, religion, Korean proficiency and anything else that might be of interest."

Prospective parents - daters? - will then speak with other parents afterwards to set something up.

These events began mostly because Korean families saw that their children had become too caught up in their careers and education, leaving little time for dating. And since marriage is an important value for Korean families, parents felt it was necessary to take their child's dating lives into their own hands.

"In their day back in Korea, it was typical for parents to arrange set-up dates for marriage prospects," The Los Angeles Times reported. "And in the age of Tinder and eHarmony, these Korean American parents are taking matters into their own hands."

What's going on in these Korean communities may reflect the nation at large, as American millennials in general are delaying marriage and family because of their career prospects and their desires to do more with their life before settling down.

In fact, the Pew Research Center found in 2014 that a record amount of Americans have never married, with 1 in 5 Americans 25 years and older having never married. Back in 1960, it was just about 1 in 10 who weren't married.

Much of this is tied to the hard economic times of the last decade, since millennials and modern singles want their potential spouse to have a steady job, according to Pew.

Women specifically have put off marriage for a number of reasons, including their prospects for better jobs. The amount of women who have jobs has increased in the last few decades, giving modern women a chance to find successful careers before starting a family, according to CNN.

Today's women also want their potential spouses to have steady jobs, too, which has become harder for men since the Great Recession, CNN reported.

"While most women still want marriage, they don't want it at just any price," CNN reported. "They don't want it if it scuttles their dreams. Marriage is not dead - not by a long shot. It is still, to most of us, the house we wish to build for our love, our lover and our children. But women want to craft a life instead of having it pressed upon them. And that means some of us will be single for a long time, and some of us will be single for life."

But, as the L.A. Times article shows, parents are looking to change this by going to extra lengths to make sure their youngsters are married. According to The New York Times, some parents will even log on to modern dating sites to help their child find love.

"Some mothers - and some fathers, too - will do just about anything to see their marriage-age offspring settle down, even if that means going where parents ordinarily should never go - online and into their children's posted dating profiles," the Times reported.

But there are some drawbacks to parents becoming too involved with a child's dating life. The Times reported that daters can feel like their parents selected the wrong partner for them, or helped them find someone who doesn't really fit their dating ideals.

That's why parents should make sure they're working in the best interest of the child, and not necessary looking for what they want for their youngster.

"If your parent is assertive or too involved in your life, this is not what they should be doing," one mother told the Times. "It's only if there is respect for the child, and the child doesn't mind."

But even when parents do act in their child's best interest, getting set up on a date can be a stressful, awkward and enjoyable experience for a youngster, especially when it's a blind date orchestrated by family.

Here are 32 feelings you experience on a first date that was set up by your parents.

1. You stress out when your mom tells you that you're going out with someone you've never met, but made a great impression on her

2. You can't decide whether to wear something casual or formal

3. You're just not having it

4. You text your date but the responses are really short because they don't want to do this either

5. You arrive at dinner five minutes late because you don't care how the date goes

6. Your date is 20 minutes late, so you have to sit and order water.

7. Your date arrives and you're taken back by their sweet demeanor and appearance

8. They also decided to dress casually

9. You're both quiet because you have nothing to say. Awkward

11. You start talking about hobbies, news events, the weather

12. You spend an unnecessary amount of time talking about the weather

13. Finally, your waiter comes and takes your drink order

14. You go back to talking about the weather

16. You start talking about the restaurant, your family and some of your friends

17. The conversation gets better and better

18. Your food comes, killing your momentum

19. You spill something on your shirt. Before you wouldn't have cared, but now you feel embarassed.

20. Your date spills something on themselves, too, just for your enjoyment

21. You both finish your meals because why wouldn't you?

23. You let your date eat more of the dessert

24. The check comes and you don't go to pick it up

25. You decide to pay because you realize your date wasn't half bad

26. You smile because you've started to enjoy the date more

27. You walk outside and briefly hold hands

28. You hug your date goodnight

29. You drive home, thinking that the date wasn't too bad

30. You get a text from your date thanking you for a great evening

32. You thank your parents for setting you up

For more on dating and family

Marriage isn't the only relationship that's in trouble for 20-somethings
The national marriage age is increasing, but not for this group of people
The new wave of millennial moms will be educated and married to 'do-it-all' dads 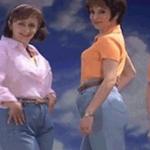 11 Myths About Becoming a Mom That Are…