Despite being well into the 21st century, we still lag behind in gender equality. We've come a long way, baby, but not quite far enough.

When I was in my late 30's and a single mom, who had only ever been a mom, I went back to school to be a carpenter. Now, mind you, it was recommended that I be a cook, or a hairdresser or a secretary, since those were more womanly pursuits and I would have the most success in those areas.

We were dashing headlong into the 21st century and I was told to be a cook? Not a chef. A cook. Now I'm not casting aspersions on that noble profession, but I have to wonder why my dreams of doing something less mainstream, less gender-normal, were shot down.

I got my wish and was put into a vo-tech class of 15 boys and one girl, all of them 16 years old. I was 38 - and a mother. Excellent! I left the whining tirades of my own teen-aged children every morning and spent the day listening to, "So this guy looked at me and I'm all like, who are you looking at? I've got a boyfriend!" and, "What should I do? She keeps talking to this guy and I told him I'd punch his face in if he looked at her again but what if she likes him?" Yea. It was awesome. But, I do think the girl and I definitely taught the boys something about gender equality that year. I quickly became the mom to all of them, and I think that was good, because they saw what "moms" were capable of.

I learned some great things - both about wood and about myself. For instance, did you know that 1" of wood equals 12" of concrete where insulation is concerned? I learned that I could measure within 1/256th of an inch. I could identify wood by looking at it. I also learned that I could retain more than water. I had goggles, a measuring tape and a carpenter's pencil. I used manly power tools and was ready to conquer the world (or at least remodel it).

My first job was working at a cabinetmaking shop in Worcester, Massachusetts. They made cosmetics counters for fine department stores. Just to give you a visual, I dressed in jeans and flannel shirts, wore a tool belt and goggles, and had to clean sawdust out of my nooks and crannies every morning when I undressed. I worked the overnight shift and was the only woman in a shop of 80 men. I ... had ... invaded ... the ... male ... dominated ... blue ... collar ... workplace.

I was forbidden to use the employee restroom because they liked it filthy and instead had to use the executive washroom upstairs. There were a handful of men who were very supportive and the rest deeply resented my presence. To them it meant no more off-color jokes or swearing and a lot of emotional drama.

Though I think we've made great strides in bringing the genders to a more equilibrious state, there are certain things that will most likely never change:

In the final analysis, what can we teach our children about gender equality?

People reflect in the workplace what they've been taught at home. Teaching our children these things about gender equality can help make things better for everyone in the future. 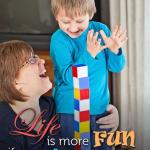 Playing to Learn: How to Entertain a Child…