Is it Okay to Co-Sleep With Your Infant?

Is co-sleeping helping or hurting your baby?

Medical experts are discussing dangerous actions parents take that can result in their baby’s death. Co-sleeping, or sharing your bed with an infant, is one source of sudden unexpected infant deaths or SUID. According to the CDC, nine hundred five babies died in America due to accidental strangulation and suffocation in bed in 2020. Almost 34,00 infants younger than one-year-old die in the United States unexpectedly yearly.

The CDC reports that there’s no immediately obvious cause for sudden infant death syndrome, or SID and SUID. In September of this year, a 23-year-old mother from Cincinnati, Ohio, Brooke Hunter, was indicted on child endangering and involuntary manslaughter after her child died due to co-sleeping, according to the assistant prosecutor of the Hamilton County Prosecutor’s Office Amy Clausing. Clausing added that after a previous incident with another of Hunter’s children, she was warned about the dangers of co-sleeping but didn’t listen.

According to the CDC, the three frequently reported types of SUID include SIDs, accidental strangulation and suffocation in bed, and unknown causes. Chief of pediatrics at the University of Maryland Medical Center, Dr. Steven Czinn, says he’s working to avoid a situation like Brooke Hunter’s. Dr. Czinn added that he and his staff must teach parents about the dangers of co-sleeping and sleep safety after labor and delivery before patients are discharged from the hospital.

According to Czinn, in the simplest forms, co-sleeping is when a caretaker or parent sleeps in the same bed with their infant. Co-sleeping is also referred to as surface-sharing or bed-sharing. Czinn says co-sleeping is dangerous because infants mostly breathe through their noses, which can become blocked quickly. That’s the main reason why parents shouldn’t put specific items in cribs anymore, like pillows, soft toys, or blankets.

So if you’re sharing a bed with your infant and they’re right up against you, the infant will potentially be in a position where they’ll have issues breathing through their nose. Also, babies don’t have the motor skills to roll from their stomach to back or back to tummy, so they can’t change positions and escape barriers. Czinn says that this leads to terrible, tragic consequences.

Why do parents co-sleep?

Due to restless nights caring for a newborn, parents are often tired. So when a parent decides to co-sleep, they think they’ll catch up on much-needed sleep. Some reports say there are some psychological benefits to co-sleeping, but the American Academy of Pediatrics and Dr. Czinn advise against it. Czinn says taking care of an infant is more than a full-time job. You can read books or go to classes, but you won’t have an idea of how tired you’ll be until the baby comes.

It makes sense for a new parent to say they’ll lie down for a little bit and not fall asleep, but it happens. The AAP says it doesn’t recommend co-sleeping but “understands and respects that many parents choose to routinely bed-share for a variety of reasons” in its 2022 policy statement. The organization said those reasons might include cultural preferences, breastfeeding, and the belief that it’s safer and better for the baby.

The policy statement continued, “However, based on the evidence, we are unable to recommend bed sharing under any circumstances. Having the infant close by their bedside in a crib or bassinet will allow parents to feed, comfort, and respond to their infant’s needs.”

How can you keep your baby safe?

Dr. Czinn advises that parents should have a backup like a friend, family member, spouse, partner, or neighbor that can pitch in so the parents can get some rest time. He also emphasized the importance of following the AAP’s recommendations for newborn sleep. The AAP says that babies should sleep on their backs in an empty bassinet or crib for the first year after birth.

The AAP suggests that parents sleep in the same room as the baby, but not the same bed, for at least the first six months. Parents should avoid using devices like home cardiorespiratory monitors that allege to reduce the risk of sleep-related deaths. If the baby is in a swaddle, it should always be put on its back. Parents shouldn’t use weighted clothing, objects, or swaddles. Swaddling isn’t necessary when a baby shows signs of trying to roll, which usually happens at three to four months, because it could increase the risk of suffocation.

According to Dr. Rachel Moon from the University of Virginia, experts have made strides in understanding what keeps babies safe while sleeping, but there’s still work to be done. A baby’s death is heartbreaking and tragic but also preventable. Experts say simple is best: babies should sleep in a bassinet or crib, without soft toys, blankets, and pillows, on their back. Stories like Brooke Hunter’s are sad to hear, but what’s more heartbreaking is they’re preventable. Officials warned Hunter about the dangers of co-sleeping, but she chose to disregard it for whatever reason. Perhaps she felt it would be better for her and the baby to sleep together. Maybe she didn’t have the help necessary to get enough rest and thought she had to sleep with her baby.

Whatever the reason, Brooke Hunter could spend 11 years in prison due to her actions. No parent wants their story to end like Hunter’s, so parents should heed the AAP’s and other professionals’ advice. You may feel like you’re helping your baby by co-sleeping, but you could ultimately hurt them in the end. The best thing parents can do is sleep in the same room with their baby, but not in the same bed. Deciding not to co-sleep could be the difference between life and death for your baby. 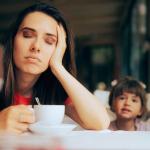 How to Stop Your Child From Stalling at…