I expected my wife to praise my work, instead she taught me something more important.

Editor's note: This article was originally published on Clint Edwards' blog. It has been republished here with permission.

I was chatting with my wife about the long night we'd had getting up with the baby, when I said, "At least I get up with her. A lot of men don't. You should be grateful."

I was tired. And I said it like she was really lucky to have me. Like I was going above and beyond as a father.

It was just after 7 a.m. Mel paused for a moment, leaned back in the chair, Aspen sleeping in her lap. Her eyes were a little red, and her brown hair was in a loose ponytail. She held the baby a little closer, and took in what I said. I expected her to agree with me. We sometimes talked about the fathers we knew who didn't get up with their babies. They viewed it as the mother's job.

Instead, Mel crossed her legs, looked me in the eyes, and said, "I wish you would stop saying that."

At the time Mel was nearly a full-time college student, a mother of three, and a school volunteer (a requirement of our children's charter school). She spent hours sitting at our kitchen table, hunched over a keyboard, a textbook to her right, and at least one child tugging at her pant leg. And despite her commitment to education, and how much I pitched in, she often commented on the pressure she felt to keep a clean house, along with take children to the doctor, cook meals, shuttle the kids to sports and other extra curricular activities, keep them looking clean and healthy, and monitor their behavior in public. She was a student and a mother, and yet she feels an enormous pressure to be the sole caregiver of our children. And there I was, feeding into those expectations by mentioning my help in the night as if it were some generous extension of my role as a father.

Naturally, I didn't think about any of this at the time. What I said was my way of trying to get her to notice my contribution to our marriage. As a father, I often feel like I'm really breaking the mold because I do pitch in around the house. If I'm home from work, I'm cleaning; I get up in the night, and numerous other things to help make our marriage a partnership. But for some reason I felt like I should receive special attention for doing things that have been, for so many years, seen as the mother's job.

I was dressed in slacks and collared shirt. In my right hand was a purple bag with my lunch. I paused for a moment, took a step back, and said, "Why? I mean, it's true. I do a lot of stuff that other fathers don't. I'm a good guy."

Mel was standing now, the baby in her arms. Our older two children were still sleeping, so we were speaking in whispers. "Because it doesn't make me feel like we're in a partnership. It makes me feel like you want me to kiss you every time you get up in the night. This is your baby, too."

We went back and forth for a while. She told me how she appreciated all that I do to help around the house, but she hated the way I acted like I was doing something really great, when in fact I was just doing what a father should.

My knee jerk reaction was to get upset. I wanted to give her a list of other fathers we knew, family and friends, who still subscribed to antiquated notions of gender roles. I went to open my mouth, but stopped, for just a moment, and thought about my feelings, and realized I should leave before I said something I shouldn't.

So I left for work without saying a word.

I drove to work angry.

I was 20 minutes into my 30 minute commute when I thought about the last time I washed dishes. I assumed that I should be getting praise, or sex, or some other reward, and for the first time I asked myself, why? I ate there, too. Then I thought about vacuuming the carpet, or doing the laundry, realized I had the same expectations about those chores, and suddenly I felt like a jerk. The understanding that Mel was responsible for home and child care was so deeply ingrained in my understanding of family and contribution, that I'd placed myself on a pedestal for doing something as simple as helping my wife with our baby in the night.

By the time I parked and walked to my office, I felt really low.

I called Mel from work, and told her I was sorry. "You're right," I said. "This is a partnership, and I shouldn't act like I'm doing some amazing thing because I get up in the night. I'm going to stop."

Mel was quiet for a moment. Then she said, "Thank you."

Clint Edwards is the author of No Idea What I’m Doing: A Daddy Blog and the forth coming This Is Why We Can't Have Nice things, married to Mel, and father to three gorgeous children. Growing up without a father in his life means Clint makes up fathering as he goes. He lives in Oregon, USA. Follow him on Facebook and Twitter.
nextarticle 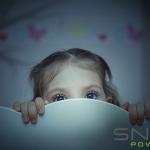