The happy couple is over the moon about their baby girl.

Actress Kaley Cuoco recently took to Instagram to announce her pregnancy with boyfriend Tom Pelphrey. She shared a sweet collection of photos of her and Pelphrey with the caption, "💕Baby girl Pelphrey coming 2023💕 beyond blessed and over the moon… I 💓you @tommypelphrey !!!" She also shared a series of photos on her Instagram story of the happy couple with the sticker saying "parents" along with photos of her baby bump. Pelphrey took his his Instagram to announce their pregnancy with a collection of photos of the happy couple with the caption, "And then it was even MORE BETTER. 🎀🎀🎀. Love you more than ever @kaleycuoco ♥️🙏♥️"

The "Flight Attendant" actress and the "Ozark" actor made their relationship Instagram official in May of this year after they were set up by their manager, Andrea Pett-Joseph. The couple met in April of 2022 at the "Ozark" premier where Cuoco says it was "love at first sight." She recalled the first time they met by saying, "I heard his voice, and I turned around, and it was like my life was over, or just starting. It hit me. It was love at first sight. We were immediately connected. I do feel like I've known him my whole life, but I wasn't ready for him." The announcement of their relationship came months after Cuoco's divorce from Karl Cook became official in September 2021 after three years of marriage.

The pair seems to be over the moon about their growing family. Recently Pelphrey was asked about his thoughts while being interviewed by Extra to promote his film "American Murder" where he said, "We're so excited. It's the most incredible thing. Very blessed … very fortunate … very lucky." He noted that "everybody's healthy" and celebrating the pregnancy has been a "beautiful thing."

Congratulations to the happy couple! 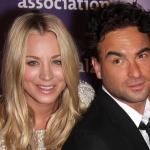