She Made a Brave Confession While Thousands Watched.

Katy Perry released her newest album, Witness, on June 9, and has since been promoting it via live stream on her YouTube channel. This live stream showed the pop star engaging in a variety of activities, from show rehearsals to yoga classes.

Something viewers didn't expect to see, however, was an up-close and personal video of Perry during a session with her therapist.

In the video, viewers got to see a side of the pop music sensation that people rarely see. While talking to her therapist Siri Sat Nam Singh, Perry breaks down and tearfully shares her experiences with suicidal thoughts, saying she wished to live a more authentic life.

"People talk about my hair, right? And they don't like it, or they wish that it was longer," Perry said during her session. "I so badly want to be Katheryn Hudson that I don't even want to look like Katy Perry anymore sometimes, and that is a little bit of why I cut my hair."

Katheryn Hudson is Perry's given name, while Katy Perry is her stage name.

During her session, she and Singh refer to Perry and Hudson as two separate beings. Perry is referred to as being glamorous, rich and happy while Hudson struggles with more "under-evolved" emotions.

When asked if she ever thought about committing suicide, Perry said yes.

"I feel ashamed that I would have those thoughts, feel that low and that depressed," she said. "You can be right or you can be loved. I just want to be loved."

Depression can affect anyone

More than 300 million people worldwide are affected by depression, according to the World Health Organization. Perry's bravery in opening up about her struggles shows that even the rich and famous aren't exempt from these numbers.

Depression can cause a major rift in someone's life, including their ability to function properly at work, school and in the family. At worst, depression can lead to suicide. Nearly 800,000 people die from suicide every year.

Of the people who die by suicide, more than 90 percent have a diagnosable mental disorder, but most are left undiagnosed, according to the University of Washington.

Perry's video is helping others to break the stigma against mental disorders and not be ashamed to seek help.

"If people can see at the end of the day that I'm just like them," Perry said, "then they can dream just as big."

Last night I witnessed the most connective play on Broadway I have ever seen called "Dear Evan Hansen" played by the brilliant @bensplatt. The whole cast was phenomenal and deliver such an incredible experience, some would call it a healing. Bravo. ❤ cc: @ericvetro1 last picture is a LION'S POSE! 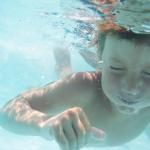 4 Shocking Ways Your Child Could Drown