Life lessons from a Russian immigrant

Remembering the kindness and life style of those who came before us allows us to help others we meet. My grandmother was one of those women who made a difference in my life with an example of kindness and courage to forge ahead through trials.

With Mother's Day approaching, our thoughts are brought back to those women who have had a positive affect in our lives. I was brought up by good parents but my grandmother, Martha was one person who had a profound effect on my life even for only eight short years.

Martha was 5' 4" with hazel eyes and dark hair. She wasn't a vocal woman in expressing a lot of her opinions as some do. Instead, she was a quiet, extraordinary woman.

She grew up in a war-torn Russia of the early 1900's living with her grandparents most of her young life. When she was 13, her older brother (the only sibling she had) went off to Moscow looking for work. With the Russian revolution going on, he had gotten involved and was killed. After hearing of his death she could not take living in Russia anymore. At the young age of 13, she packed her bags and left permanently. She came across the ocean to America in 1906, all by herself with whatever she could carry on her back and settled in Brooklyn, New York near her cousins. She was determined to make a good life for herself. One of the precious items she carried was a rolling pin which I now have in my possession.

She became a seamstress to make a living even though she couldn't speak English. But she learned and had worked 10 years sewing for others. In the middle of winter, on her first day of work, someone had stolen her coat and she had to find a way to get another one. It was a difficult life living so far away from the world that she knew, but she kept on in her work and eventually became a citizen of the United States. After those 10 years, she married one of her mother's sister's sons. Yes, he was her first cousin, but they loved each other. She became a dedicated wife and was determined to make her life a good one. She cooked like no other and knew how to stretch her food budget and prepare delicious meals. She could make the best pound cake ever and introduced me to dried figs.

Her husband eventually became very successful in his business, but she never changed her outlook on life. Always helping others around her, she was down to earth and thought of others first. Eventually, most of her husband's family lived in Brooklyn close by and she would visit often to make sure they were all well. As a child, I would walk with her while she did her visiting. She always treated everyone kindly and worked hard at keeping her family happy.

Throughout her life she experienced many tragedies. Out of the five children she gave birth to, only one lived to adulthood - my father. When WWII started, my father enlisted and went off to war. Her only child left for the Europe where she had lived so many years ago and it was difficult for her to live with the idea of never seeing her son again. Eventually, my father returned home safely and she was so very grateful. She would sit by his bed every night for a month asking questions of what he saw and what he did and he was able to talk to her about it which helped him deal with the trauma of war.

My Grandparents were married for 52 years until my grandmother passed away in 1969. She left behind a wonderful example of a life with tragedy and trials, and overcame great obstacles. She had a positive attitude which made for a contented life.

A shining example of determination

Although I had only a short time with my grandmother, I learned a lot from her. Her quiet determination to overcome discouraging times and press forward has always been a great example to me. In times of trial, we need to remember that we can make a difference in the lives of our families as my grandmother did. The determination to make a good life for herself and her family is worthy of great recognition and touched all those who she knew and loved. She was happy with her accomplishments which says a lot for someone who came to this country only with what she could carry on her back. 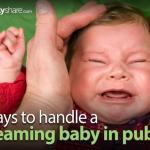 5 Ways to Handle a Screaming Baby in…