According to the National Survey of Family Growth, less than two-thirds of first marriages (64 percent) will last up to 10 years. About 50 percent of marriages will last less than 20 years. With one-third of marriages ending in divorce or separation, it is no wonder no-fault divorce is such a popular notion. Couples so easily end and rewrite their love story with no admission of guilt and a weak commitment. What happened to the days when you would sacrifice every moment of your day to be with your love? Do you remember those days? Marriages can be saved on that one principle, sacrifice.

Sacrifice is the essence of love; it is the substance of it. The antonym to sacrifice is selfishness. John Gottman, a researcher of couple relationships identified four predictors of divorce that he noted in couples experiencing conflict. Gottman later named these predictors the Four Horsemen of The Apocalypse. I like to think of them as the four indicators of selfishness: Criticism, Contempt, Defensiveness, and Stonewalling.

Criticism is the first of the horsemen. Gottman explains in his book, "Raising an Emotionally Intelligent Child," that criticism is not just complaining; it is attacking the value and personality of another person. A critic is not concerned with what the facts are or what happened, only how dumb, inconsiderate, or mean their partner acts.

Contempt involves building a mental case against one's partner. They think about ways to get even before anything has been said.

Defensiveness is the human response of when to fire back insults in retaliation. Couples, at this point, are looking to be justified rather than discuss the core issue.

Lastly, Stonewalling is a significant step toward divorce if left unchecked. Stonewalling involves withdrawing emotionally and sometimes physically from the relationship. When a partner is speaking they may tune out their partner and refuse to speak to each other.

The Four Horsemen are the perfect plan of marital misery. If we are willing to go down this road and indulge in selfish behavior, we are sure to find a glorious pot of selfishness.

What can we do to avoid such destructive behavior? There are many options, but the one-word answer is sacrifice. When negative thoughts about our partner enter our mind, we can say "I will avoid asking about the messy kitchen because I love my spouse and I don't want them to feel bad."

If you frequently become critical about trivial subjects, consider apologizing and thanking your spouse for the ways they make life better. If you are struggling to meet such minimum requirements, it is time to counsel with a trusted professional. Meet with a bishop, therapist, or a psychologist to develop a plan and a committed effort to have a happy marriage. The great thing about change, especially changing yourself, is that the relationship can change. If the tension in a relationship is the result of selfishness, which often both partners contribute, it is not an incurable disease, as some would explain.

Clayton Spencer graduated from Weber State University with a major in Family Studies and minor in Psychology. He enjoys studying about healthy family patterns and talking about the challenges of family life and hopes to continue this passion into graduate school.
nextarticle 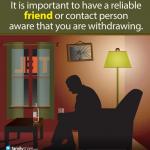 How to Cope With Withdrawal Symptoms