Mom Gets Kicked Off Plane For Breastfeeding; What You Need to Know

She Was Breastfeeding Her Infant to Keep Him From Crying, But Was Then Booted From the Plane.

Traveling with children is difficult, especially if your plans include an airplane and an infant.

While other passengers may inwardly (or outwardly) groan when they see a family with young children board a plane, most parents fear being "that" family with screaming and inconsolable children.

Parents are pros at planning ahead with snacks, entertainment, and being cautious of nap times, but when flights get delayed, it can leave parents scrambling to improvise.

One mom's improvising got her booted from a flight with her infant.

Mei Rui was traveling with her baby son. The flight was delayed due to bad weather, which led to her breastfeeding her son before takeoff. According to Rui, she wanted to ensure he was fed and happy during the flight; and the plane's door was still ajar and other passengers were still moving around the cabin.

Most parents likely would have done the same in such a situation. "Every parent with a young child can image [sic], you don't want to be that parent on the plane," Rui said. "It would be very embarrassing. I was just trying to avoid that."

Flight attendants passed by Rui and her son without saying anything, and then one approached and told her her son needed to be strapped in to his seat for takeoff. She asked the attendant for a couple more minutes, promising to be finished nursing before they shut the door.

She was asked to get off the plane

As the flight attendants gathered to discuss the matter, Rui chose to stop nursing and strapped her baby into his seat, at which point he began to cry, as she had feared. Rui was then told she needed to exit the plane.

When Rui questioned why, they told her it was because she was not compliant. A statement issued by Spirit Airlines said, "Our records indicate a passenger was removed from Flight 712 after refusing to comply with crew instructions several times during taxi to runway and safety briefing," the statement read. "To protect the safety of our guests and crew, FAA regulations and airline policies require all passengers to stay seated and buckled during takeoff and landing. We apologize for any inconvenience to our guests. As a courtesy, we've issued a full refund to the passenger in question."

Airline regulations and breastfeeding in public

It's important for parents to know airline regulations regarding children and infants as well as rights regarding breastfeeding in public.

According to this particular airline's website, children between seven days old and up to two years old may ride on a parent's (or someone at least 15 years old) lap (with proof of age). So why couldn't this mother continue nursing her baby while having him in her lap?

As far as breastfeeding in public goes, nearly all 50 states have laws protecting mothers who choose to breastfeed in public (covered up or not), according to the Huffington Post. Basically, if a mom has a right to be there with her infant, she is protected by law to breastfeed her infant there — not hiding in some dirty bathroom stall.

While this example is disheartening, we don't know the entire story. To avoid this happening to your family, it's best to get familiar with the laws and regulations regarding travel with children before you do so. Asking questions and planning ahead is the best thing you can do to prevent an unwanted and unnecessary altercation.

How do you travel with children or an infant? 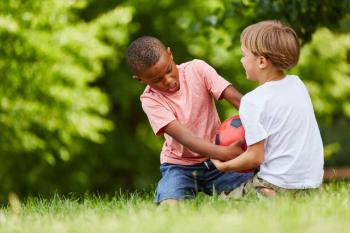 3 Things to Teach Your Children so They…