Every mother has them and every child cringes when they hear them. Then, something amazing happens. We hear the same words come from our mouths to our children then turn to see where our mother is and find that she is in our hearts.

In the toolbox issued to all mothers, there are many useful implements. Among them lies a dusty old book. If you open that book, you will see the many words strung together to form phrases. Phrases which will then be used repeatedly on children in the hopes that they make some sort of sense. Truthfully, they often have no effect until children grow into parents themselves. Then, they dig out that old dusty book and use them on their children. When they hear these words come from their own mouths, they will cringe just as they cringed when their mothers said them. They will look around to see if their mother is actually standing behind them manipulating their mouths with some puppet-like mechanism. Then, they will realize that, until the very moment they utter these words themselves, they had no idea the wisdom within these words.

Here are the most used mom-isms from the "mothers" in my life that I have used myself:

"The sun is going to shine on your back door some day."

This is from my mother. The emphasis goes on the word "some." To this day, she uses it when I am down and have called for a little dose of hope.

"They may kill you, but they won't eat you 'cause you're too tough!"

This was from my Grandmother Shepherd, one of the toughest women I ever knew. I think of this phrase time and time again when I feel like the odds are stacked against me.

"If God had meant for you to run around naked, you would have been born that way."

This was from my Grandmother Rickman. I must disclose that she said this to me at a time when I was young, and the world was in the 1970s. Hot pants and halter tops were quite popular. I may or may not have dressed scantily. It was the 1970s, and I really don't remember.

"If all your friends jumped off a bridge, would you?"

Come on, now. I know your mother said this to you at one time or another. This is the first phrase in the book and has been uttered since Eve. Only she probably said, "If all your friends ate from the tree, would you?"

"I hope you have a daughter just like you someday!"

This was generally hollered after I had done something really disrespectful, rude or mean. Guess what? Yep, I do. Thanks, mom. The curse worked.

This little ditty underwent a brief hiatus during the 60s and 70s when someone had the bright idea to let children know that they were human beings with rights. Then, we had to begin lengthy explanations to reason things out for them and help them understand the reasons they should or shouldn't do something. Now, I'm pleased to report that it has resurged and is alive and well in that dusty book in the maternal toolbox.

"You just wait until your father gets home!"

Of course, by the time father got home, mother had long forgotten the transgression. However, as a child, I didn't know that. I lived in fear that when I least expected it, he would walk into the room and beat the daylights out of me. This phrase served as punishment in and of itself.

This is the archaic form of maternal resignation. I have modernized it for my children. I simply tell them - 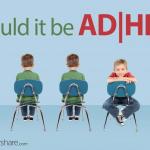 Could It Be Adhd?