Mom lets a man play with her toddler at Target, but when he pulls something out of his pocket she starts to cry

I Would Have Started Crying Too ...

Toddlers are the best. Sometimes you don't know what's going to come out of their mouth and sometimes they're an absolute nightmare, but they're usually just downright adorable. And if you're a mom of a toddler, you know it can be a challenge to bring them along to the store.

One mom Alyssa Hacker was in Target with her 18-month-old son when they found toy dinosaurs. Owen grabbed three and started playing with them, trying to decide which one he wanted to buy.

One of Owen's favorite things to do is say "hi" and "bye" to strangers, so Alyssa wasn't surprised when her son yelled "HI" to an older man in the aisle while playing with the dinosaurs. Instead of simply smiling at the young boy, the man turned around and said, "Hey sweet boy."

Not only did he say hello, the man started playing dinosaurs with Owen

Although Alyssa was a little hesitant to have a stranger play with her son, she told TODAY Parents that she didn't feel uneasy. She said, "That's not like me ... I'm always in mommy protective mode, but I know this was a God thing that happened."

After a few minutes of playing dinosaurs, the man took $20 out of his wallet and put it in Owen's shirt pocket.

When the man looked up, Alyssa noticed there were tears in his eyes

The man looked at Alyssa and said, "I just lost my 2-year-old grandson last week ... You take this money and buy this boy all three dinosaurs." He then rubbed Owen's back, wiped away his tears and walked away.

Owen, of course, didn't understand the heartache the man was going through, but as he was walking away Owen yelled, "Thank you!" He made a huge impact on this man, and now their story is going viral.

A reflection of God's love

Woman's Day reported that Alyssa said, "I did pray that night that God would give me the ability to be able to teach and translate to Owen what he did for that gentleman as well as what the gentleman did for us ... how much of an impact it's had on so many others."

when you fall asleep with your super hero cape on...or your blanket lol

Loss of any kind is heartbreaking, and that man could have looked at Owen and felt bitter that his grandson was taken from him too soon. Instead, he reacted in the most beautiful way, and Alyssa hopes that Owen will continue to have a positive impact on others.

this momma just cried in the middle of Target. We were at target waiting on Grammi and we found some dinosaurs. Owen...

She said, "From the time I found out I was pregnant, I always prayed that my child would be a reflection of God's love. I think he's doing a fine job at it so far." 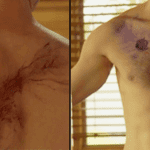