Mom notices a rash appearing on her otherwise healthy baby, but she soon realized there was something much worse happening

Share This Story to Spread Awareness of This Scary Condition.

Ashley Nagy from Arizona had just given birth to a beautiful baby girl when, a few days later, she noticed something was a little off. Her baby was getting sick, and Nagy was set on figuring out what was wrong with her little Charlie.

Not just a rash

She was only a few days old, but a rash started to form on her neck then spread to other places in her body. According to FaithIt, she "initially suspected it was a milk rash, but as the red dots started to pop up on her armpits and legs, she knew there must be a deeper rooted issue."

The brand new baby received some antibiotics and cream to see if something could help with this mysterious rash, but they didn't help — the rash kept spreading.

7/15/16- Charlie started to breakout fast and her topicals were not working. Her pediatric derm put her on another dose of antibiotics? #Psoriasis #InfantPsoriasis #BabyPsoriasis #PsoriasisSucks #GetYourSkinOut #PsoriasisCure #Dermatologist #PediatricDermatology #Pediatrics

After two months of trying to figure out what was wrong with her little baby, Nagy finally found answers when little Charlie was diagnosed with Psoriasis Vulgaris.

According to Medicine Net, "Psoriasis is a noncontagious, chronic skin condition that produces plaques of thickened, scaling skin ... Psoriasis commonly affects the skin of the elbows, knees and scalp." The condition is most common in adults, which is why Charlie's case was so rare.

When Charlie was six months old, the condition got so bad she had to stay in the hospital for three days. Nagy said in an Instagram post, "We had TONS of doctors/nurses/interns/volunteers wanting to come see the 'psoriasis baby" (I prefered to call her a unicorn). They hadn't seen anything like it, [sic] they said she was the youngest and most severe case they had seen.

8/5/16- Taking her to PCH was the best decision we could've made. They immediately admitted her and kept her for 3 days. We had TONS of doctors/nurses/interns/volunteers wanting to come see the "psoriasis baby" (I preferred to call her a unicorn ?). They hadn't seen anything like it, they said she was the youngest and most severe case they had seen. #Psoriasis #InfantPsoriasis #BabyPsoriasis #PsoriasisSucks #GetYourSkinOut #PsoriasisCure #Dermatologist #PediatricDermatology #Pediatrics

A long journey ahead

Nagy now runs an Instagram account about their journey, keeps a positive attitude and is trying to educate everyone on Psoriasis. She talks about her experiences out in public with her little girl, and she's trying to let everyone know that Psoriasis isn't something to hide or be ashamed of — even though it can be a pain.

She said, "They look at her and then they look away and they try not to really stare." Nagy makes it a point to hug and kiss her daughter in public so everyone knows her condition isn't contagious and it's nothing to be afraid of.

*Real Life Rant* At the end of my rope with this disease! She was doing SO good on her diet but now we cannot get this flair under control. She still has a cold (runny nose and cough). The more I look at this and the more I see others inflammation the more I'm thinking it's NOT psoriasis and the doctors have it wrong. I just want to cry. I'm a strong believer and I know the Lord has a plan and purpose but I cannot help but get angry and mad, why Charlie? ? okay rant over.. I know she's not the only one battling this and I know she's not alone but it just REALLY SUCKS Y'ALL!

Nagy wants Charlie to know her worth, and that her condition doesn't define who she is. In a particularly heartbreaking Instagram post, the mom wrote, "Not seeking sympathy just awareness! I will not let this define her. I will keep fighting until I find a cure for her. Please keep CJ in your prayers."

Not seeking sympathy just awareness! I will not let this define her. I will keep fighting until I find a cure for her. Please keep CJ in your prayers. She's one strong bad @$$ little girl! ?? #Psoriasis #InfantPsoriasis #BabyPsoriasis #GetYourSkinOut #PsoriasisCure #Dermatologist #PediatricDermatology #Pediatrics #AutoimmuneDisease

Charlie's family is keeping such a great attitude, and this little girl is such a strong fighter. Share this to spread awareness of psoriasis and Charlie's story. 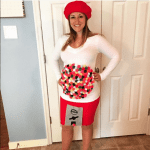 24 Ways to Dress Up Your Baby Bump…