They Just Couldn't Believe It Was Happening in Their Neighborhood.

Jeremiah Fjeld's family hadn't lived in the neighborhood very long when his wife noticed a couple of men at the corner of the playground. After watching them for a while, she realized what the men were doing. She panicked, called her husband and grabbed her children.

Jeremiah immediately called the police and then took control of the situation. He walked over to the men, grabbed one by the backpack and asked him what they thought they were doing.

"This is for our kids and it's not for you to do your drug deals," he told them. Then he told them to never come back.

Because of the confrontation, the men left immediately

The men left before the police showed up, but the police promised to keep watch over the park. Although Jeremiah believed the police, their promise wasn't good enough for him. He took matters in his own hands.

Jeremiah made a sign and posted it as a reminder to all what the park was for in the neighborhood. The sign said, "No more dealing drugs here. This park is for our kids. We've had enough and we're taking our park back."

The first sign he posted with a similar message was taken down. Determined to protect his family, he posted the second sign, which is much larger and cemented into the ground.

Jeremiah wanted to protect his family

Jeremiah went on to explain why he is so passionate about the drug problem in his neighborhood, besides wanting to protect his family.

"In my 20s, I knew what it was like to be in the drug scene and to be the bad guy so I was on the other side of the tracks," he said. "You might as well say something now because eventually, they'll end up in prison or dead and it's too late then."

Jeremiah wants to help other people get out of the drug scene and change their life for the better. He was where these men were only a couple years ago, and he knows with help they can make their lives so much better.

What we can do

1. Get involved in your community

This is very general, but I think it can be one of the most important things to do. There are a lot of lonely people on the earth that are turning to drugs to escape emotional pain. Get to know your neighbors. Being a good neighbor can help people not feel alone and let them know they have someone they can turn to in times of need.

Teach your children the dangers of drug and alcohol abuse. Teach them that you are a safe person to turn to if they need help. If they know you will help, they will be more likely to talk to you if either they or someone they know is struggling. Being a safe person to talk to means you won't judge them and will offer help and correct resources to pull them out of the negative spiral of drugs.

3. Don't be afraid to take a stand

Don't be afraid to call the police, talk to your neighbors or go to your local government if you believe a drug problem that is getting out of hand. Often times they will have some solutions and resources you may not have known about. There is help out there, just don't be afraid to ask for it.

Drugs are becoming more and more of a problem, but we can help by taking a stand. Like Jeremiah, we can make our neighborhoods a safer place. 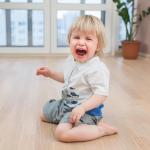 6 Ways to Calm Your Child From a…