Mom warns what it’s like when your unborn baby has strokes in your uterus; here’s what you need to know to save your baby from the catastrophic effects

She Felt Something Was Off, But the Doctors Didn't Listen to Her Until It Was Too Late.

Having your first kid is exciting and nerve-wracking, but when one mother started feeling more than just nerves during her first pregnancy, her whole world took an unexpected turn.

Micah Simmons was 35 weeks pregnant with her first child when she felt that something was not right. There were no obvious signs - just a mother's intuition. And her doctor assured her that her worries were just the result of nerves because her unborn son appeared to be healthy.

Later on down the pregnancy, Simmons began feeling telling signs of decreased fetal activity and funny movements. Consequently, she soon delivered her son by C-section, and the doctors realized they had made a serious mistake by ignoring her this mother's intuition.

The common, but little-known, cause

The risk of pediatric strokes is greatest during the time period shortly before birth to one year old. It remains in the top ten causes of death for children.

The Simmons family named their baby boy Logan. Though his parents are so grateful he survived multiple strokes while in the womb, Simmons said Logan has severe long lasting effects, including cerebral palsy, epilepsy, autism, serious cognitive delays and more, according to Cafe Mom.

Well into her pregnancy with her second child (this time a daughter) Simmons began having similar feelings of unease. This time, she immediately acted confidently and urgently.

"With Alyssa, I was seeing a different doctor and she trusted my mama gut," she told Cafe Mom, "and delivered within hours of me saying I knew something was off. And hence why Alyssa's strokes caused much less damage and she didn't have as many as Logan."

Oh, my sweet, sweet girl. Alyssa I knew from the moment you were born you would change lives. You are the most gentle...

Posted by Micah Simmons Photography, LLC on Monday, May 8, 2017

In a Facebook post, Simmons pleads to all parents: "Please know the signs of a stroke! It can happen to anyone including in utero (in mama's belly), in infants, in toddlers, in children, in adults. It can be devastating."

Simmons wants to use her family's experience with pediatric strokes to raise awareness to other parents who may have never heard that unborn babies can have strokes.

"Today, we live very happy lives. Logan does very well, he is greatly affected, however he is happy, loving and so fun and funny," Simmons said.

Many of you don't know this, but both of my first two littles had #strokes. Yes, that's right. Some of you knew that...

Posted by Micah Simmons Photography, LLC on Friday, May 5, 2017

"I am blessed that my children didn't die from their strokes," Simmons said. "I am blessed that we live in an area with a wealth of information and doctors. I am forever grateful that these two little chose me."

As a mother, take a leaf out of Simmons' book and trust your gut. You never know when it can save your child's life. 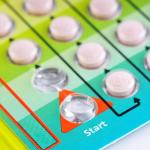 If You're Taking This Type of Birth Control,…