Mom’s guide to apps your teens are using

If you've checked your teen's phone lately and found apps you didn't authorize, it's time to do some research. Some are safe to keep, but many might need to be deleted.

It's hard enough to keep up with the social lives of teenagers, but now parents need to keep track of their teens' digital lives too. New apps and social media platforms arise as quickly as fashion trends. It's hard to know which ones are appropriate for kids and teens and which ones pose risks. Here's a quick guide to seven apps your kids might be using.

This is an app that's gaining traction among teens, and parents need to be very aware of it. Yik Yak is a messaging app that adds in anonymity. Users have no passwords or usernames. They simply post whatever they want and it is sent out to the geographically closest 500 users.

Yik Yak has already caused problems on campuses across the U.S., from California to Vermont. Data collected by the app has been used to prosecute Alabama teens accused of making threats via Yik Yak. The message here is that nothing is truly anonymous. As a parent, I wouldn't want my child receiving messages from strangers.

Snapchat may be the most popular app for teens right now, and many experts suggest its use will go way, way up before it goes down. Snapchat lets users post messages, photos and videos for brief periods of time, alluding that the posts disappear never to be seen again. Of course, this isn't true. Screen shots can be taken of the post, so that silly photo your teen sent on a whim might be kept by someone else forever.

Teens are mostly using Snapchat with their friends, and it is supposed to be a fun app that lets kids post things "in the moment." Known as the "sexting" app, parents should make sure their teens are using Snapchat appropriately.

This texting app is fairly straightforward. Kids use it to message friends, and the basic version has lots of ads. Teens do need to be careful not to use their real names as their usernames to afford themselves some privacy. Parents might also need to monitor the content and make sure kids understand the different kinds of texting (individual, group and to the world at large). With over 150 million users, your child's information needs to stay private. This app also has hundreds of add-ons that can connect to the original app. These might not be safe for kids.

Children are taught to be safe around strangers, but this app puts strangers together in a chat or video room. It is not for children or teens. Users of the site are often looking for sexual chatting and language is an issue. Since the slogan for the app is "talk to strangers," it's pretty obvious parents don't want their kids using Omegle.

If your teen loves the drama of confessions, he or she might be drawn to Whisper, where people anonymously confess things for other users to comment on. Confessions might be as simple as a crush, but many are darker or more sexual in nature. Confessions are accompanied by photos. Users don't have to say who they are, but are encouraged to reveal more about themselves in a "meet up." Young teens might be confused by some of the confessions, which can be mature and conflicted in nature. They also might be tempted to whisper things that should be kept private.

If used responsibly, Ask.fm is a fun app where users can post questions for others to answer. Unfortunately, tweens and teens are posting inappropriate questions, using obscene language, bullying and revealing more than they should as they use this app. Users are supposed to be anonymous, but teens often post photos and videos of themselves or link to their Instagram or Snapchat accounts, leaving no question as to who they are. Ask.fm has also been directly linked to a few teen suicides. Parents need to take this app seriously.

As apps rise and fall in popularity, parents need to become tech savvy. Look for reviews and recommendations for apps, and check your child's phone often. Teens aren't always capable of making the best decisions, and they still need parents to guide them. The digital footprint they are making now will affect them as they grow into adults, so help them learn to use social media wisely. 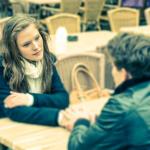 You Don't Know How Bad You Are Until…