She Was Shocked to Discover She Had a Daughter She Didn't Know About.

Melissa Ohden's mother had no idea her baby survived the abortion. At 31 weeks pregnant, she spent five days getting a saline drip which poisons the unborn baby to death. After the drip, the abortionist induced labor and advised his patient not to look because the dead fetus would be too hideous. The mother left the hospital believing her child was born dead.

However, her baby — Melissa Ohden — was still alive.

Ohden told NewsTalk, "(T)here was a utility closet there at the hospital (with) buckets of formaldehyde (where) they would place a living child like me, if we survived. They would put the child in the bucket, write the name of that child on the bucket, and they would be left there to die."

But Ohden was lucky; two nurses decided her life was worth saving.

I came across this photo of me tonight. I was 25 days old and had made it up to 2 pounds, 10 ounces.

As soon as she was born, nurses rushed her to medical care. Even so, Ohden had to fight for life in her damaged body. She said, "I had severe respiratory and liver problems... I suffered from seizures for an extended period of time. The doctors just really made it clear early on they didn't think I would live." But somehow, she did live.

Ohden was adopted and by age five she was given a clean bill of health with no health complications or mental disabilities.

She grew up knowing she was adopted, but it wasn't until Ohden was a teenager that she learned the truth about her birth. Understandably, Ohden took this news hard. In fact, while she acted like she wasn't affected by the knowledge that her biological mom tried to abort her, Ohden was deteriorating inside. She wrote:

"The world felt like it stopped spinning the night I learned that I was an abortion survivor. I was angry and scared, and I felt ashamed and guilty for living. Every little emotion you can feel, I felt that night. I was in pain for many years after that. As a teenager, I developed bulimia and turned to sex and alcohol to cope with the pain. My parents never realized how much I was hurting, though, because I was great at hiding it. From an outsider's perspective, I was the perfect kid."

The only way that Ohdem was able to recover from the pain of her history was by choosing to forgive her biological mother - and herself.

"Forgiveness is a huge part of my journey," she told The Blaze, "Accepting that I am who I am and I don't need to be ashamed of that truly set me free. And I think that's something a lot of people can relate to - you try to run away from something difficult or painful, but you just can't. And my faith is what saved me from that. God put me on this journey and I'm thankful."

This healing journey led Ohden to search out her birth parents. The process was arduous and Ohden was only able to find them through an accident: Although HIPAA requires names be blacked out, for some reason, the hospital sent Ohden a copy of her medical records with her parents' names on visible.

Ohden tried to reach out to her birth father, but he passed away before they were able to make contact. After years of searching and a few years of email and phone communication, Ohden was finally able to sit down with her birth mother, face-to-face.

Of the experience Ohden said,

"It was better than anything I ever expected, but at the same time it was probably more difficult than I expected - only in the circumstance that I knew she was hurt by what was done to her. But to look in her eyes and to see how much pain it caused her... I don't think I was prepared for that look in her eyes."

Ohden learned that her mother hadn't wanted to abort her baby. The abortion was forced by her parents. In fact, it seems Ohden's mother's signature was forged on the consent forms.

Ohden said, "(My biological mother) has lived with so many regrets, the biggest one being that she never ran away from her parents. Now I'm grateful to have an opportunity to share our story with the world in the hopes that no other woman and child will go through what we've experienced."

So today, Ohden has become a voice for the voiceless, spreading awareness and teaching about failed abortions as well as providing support for abortion survivors.

Read her story in its entirety and in her own words, here in "You Carried Me: A Daughter's Memoir." This is an affiliate link. If you choose to buy it, we may receive a portion of the revenue at no cost to you. 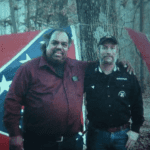 Black Man Befriends Members of the Kkk by…