Learn From Me Before You Have to Learn It the Hard Way.

On April, 23, 2005, my life changed forever. I became a Dad. Up until that moment, I had plenty of ideas about what life would look like with children, but not a day of actual experience. Little did I know that kids change everything!

I had no idea how little I knew. I felt pretty qualified to be a Dad, because I could finally grow some facial hair and I'd been able to keep a dog alive and fed for several years. I figured that having a child would relatively easy. I was clueless.

We've had two more kids since that day. My family is the greatest gift God has ever given me, and I wouldn't trade the gift of parenthood for anything in the world, but I wish someone would have told me some things before I had to learn them the hard way.

I've made MANY more than ten mistakes as a Dad, but for the sake of time, I've highlighted the "Top Ten" hard-learned lessons I've picked up over the past decade from the trenches of parenthood. I hope this will be helpful to you in your own parenting. Learn from my mistakes and start applying these tools right away! A smart person learns from their own mistakes, but a wise person also learns from the mistakes of others.

1. Learn from other parents, but don't compete with them

I have a competitive streak in me, and early in my parenting (and even sometimes now) I struggled with thinking that being a good dad meant that I had to be a better dad than other dads. In my twisted logic, I would look at my kids' performances or behaviors and rank my parenting based on how they seemed to measure up with other kids. This was a toxic, self-focused approach. Now, I try to encourage other parents and learn best practices from other parents, but I don't feel the need to compare myself or my kids to anyone (and neither should you).

2. Make parenting decisions in complete partnership with your spouse

Most of the disagreements in our marriage have stemmed directly from stress related to parenting and differences in parenting style. I made the mistake of trying develop my own parenting plan independently of what Ashley was doing. This caused inconsistency, frustration, miscommunication and unnecessary strain on our kids and on our marriage. Now, I try to make sure the kids are hearing a unified message from both parents instead of two separate messages.

I had a one-size-fits-all approach to parenting, but I've learned the hard way that it doesn't work. God prewires each kid was a masterfully unique personality, and if we try to squeeze them all into the same mold, everyone will wind up frustrated. Sure, there need to be rules and standards that apply to everyone in the family, but our approach to each child has to be as unique as our children are.

I'm pretty task-oriented, so when I get in the middle of doing something, I don't like being interrupted. My kids seem to have a built-in timer, because they wait until I'm at my busiest to want to play or talk about something. This used to frustrate me to death, but I'm learning to welcome it. Those moments are gifts and the times that my kids will actually want to hangout with me will pass by quickly (they'll be teenagers soon)! I still get caught up in my own little world sometimes, but I try to remind myself that whatever I'm working on won't matter in ten years nearly as much as my relationship with my kids will matter.

I tend to be a "Yes Man." I'm a pretty agreeable guy, and I like everyone to be happy. This mindset has gotten my into a lot of trouble as a Dad, because I've said "Yes" too often and it's caused some negative behaviors in my kids. I'm learning the power and beauty of the word, "No." There has to be a balance. I don't think I've completely found the balance, but I doing better than I was in the beginning.

6. Keep investing in your marriage

When our first baby was born, we felt guilty about ever leaving him with anyone else. We thought we were bad parents if we took the time to invest into each other. We quickly learned that we're better parents when we're better spouses. Don't put your marriage on hold while you're raising your kids or you'll wind up with an "empty nest" and an empty marriage! Give your kids the security that comes from seeing their Mom and Dad in a loving, committed marriage. Find some good babysitters and use them often!

I allowed pride to keep me from asking for help as a parent. I was scared to admit that I didn't have it all figured out. When Ashley and I started reaching out to some older couples for advice, we learned some wonderful new parenting tools and we also got some great new friends in the process! Be willing to develop a relationship with parents who are further along in their journey and have older kids who behave like you want your kids to behave. Ask them how they did it!

In our culture, we seem to have adopted a passive attitude towards parenting where we allow schools, churches and even our TV's to teach our kids values. While I'm all for being involved in a healthy church (in fact, I'm a pastor), and getting your kids in a good school, I've realized that we can't expect institutions to teach our children values. That's our job as parents. If you think something is important for your child to know, then be the one to teach them and also be willing to model it in your own life.

I think I was too serious in the early years. There are definitely parenting moments that require seriousness, but I firmly believe that joyful families are the strongest families. I want laughter to be the soundtrack in our home. I want more moments when kids spew Pepsi out of their nostrils because they're laughing so hard. Those are the memories that will last and the moments that bond people together. Promote laughter in your home. Make it a safe place to be happy.

I've beaten myself up a LOT over the years over my parenting mishaps. It's important to take an honest, frequent self-evaluation so you can keep improving, but you've got to always be willing to give yourself a lot of grace. You're going to blow it sometimes. When you do, be willing to admit it, learn from it, and move forward. Above all, keep loving your family. In the end, love is going to be all that really counts, anyways. 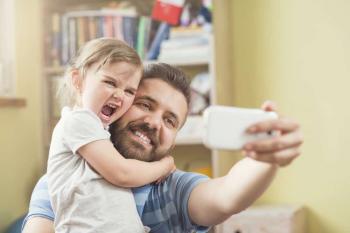 7 Values Parents Must Teach Their Children