New advice: Don’t just do something, sit there

We have evolved into a society where there is so much happening that we are always doing something, sometimes at the expense of thinking and feeling.

Editor's note: Portions of this article were previously published in the Deseret News.

Do something! Do something! Are you a little tired of feeling like you have to do something all the time, every minute of every day?

Did your mom used to yell at you, "Don't just sit there, do something?"

It's a favorite phrase of moms. And they feel they need to say it often to their kids. There are a lot of variations on the theme: "Quit wasting time." "Come on, let's get going." "Get off your butt." "Be active!" "Don't let moss grow under your feet." Even "An idle mind is the devil's workshop."

And we say it to ourselves, too. After all, it is better to be "up and doing" than to be down and drooping. No question. Always has been, always will be. No argument. We automatically assume that doing something is always better than doing nothing.

But we need to be careful because our world is changing. We have evolved into a society where there is so much happening that we are always doing something, and sometimes at the expense of thinking and feeling.

Back in the less technological, less complex and less competitive days of yore, there were natural seasons and periods of reflection and repose. There were natural "breaks" after the planting or after the harvest, and when it got dark at night, work was done. Not so today.

We may have business cycles, but none of them involve rest. We have weekends, but they're usually the time to do the work we couldn't get to during the week. And we have evenings, but the night belongs to homework with the kids, or working overtime, or trying to "play as hard as we work." And if we ever do stop for a moment, it is to flop down mindlessly in front of our large or small screens, which is just another form of business.

During our hectic days, if there is a spare moment, we fill it up with technology and gadgets. You never see anyone sitting and simply relaxing or reflecting-everyone is checking email or texts, eyes down, focused on a device.

We coined a new saying once by accident. One of our kids was watching a ballgame on TV and Linda was reminding him that his homework and his music practice and his dishwasher-emptying was not done. She threw the ol' mom's cliché at him, but in her frustration it came out backward, "Come on son, don't just do something, sit there!"

We had a good laugh, but later we started thinking about the flipped-around phrase. It occurred to us that, in our over-busy and hectic lives, the reversed version might be more relevant than the original.

We sometimes let ourselves get infected with the notion that any action is preferable to any inaction, that doing is superior to thinking, that doing something-anything, is better than occasionally doing nothing at all so we can sit there and think, instead.

In a world where there is an endless number of things to do, we can become frantic whirlwinds of activity, working ourselves to an exhausted frazzle each day and yet looking back over the weeks and months and not being able to see much progress. Like someone sawing furiously with a dull saw, we keep doing something that makes us tired and stressed, yet we never take the time to sit and sharpen our saw.

We need the new maxim that Linda coined by the slip of her tongue: DON'T JUST DO SOMETHING, SIT THERE.

Sit there long enough each morning to decide what is really important during the day ahead.

Sit there long enough once or twice in the middle of the day to collect your thoughts, to meditate for a moment, to calm your mind and regain perspective.

Sit there on a child's bed at bedtime and just listen to that precious son or daughter.

Sit there and watch a sunset rather than just rushing by to do something.

The fact is that just "sitting there" is rapidly becoming a lost art, stomped out by trying to do something every minute. Reversing this old cliché in our minds can give us a new and useful maxim that slows us down, tunes us in and makes us more selective and more purposeful in the things we choose to do. 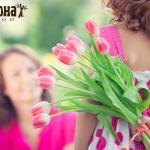