A new study says we're more likely to trust politicians who believe in God, which has shaped how politicians talk about their political standing.

There's a reason that political candidates often talk about their faith in God: Americans tend to trust those candidates more.

A new study published in the journal American Politics Research found that Americans feel politicians who share their religious beliefs are more trustworthy and favorable.

Candidates especially benefit when they talk "directly or subtly" about religion during their campaigns, Phys.org reported.

This makes it especially hard for nonreligious candidates to succeed, the researchers noted.

"Their religious identification reflects a powerful, widespread, but often subtle and unconscious bias in American society against those who do not believe in God," researcher Scott Clifford of the University of Houston Department of Political Science said.

Clifford, along with fellow researcher Ben Gaskins of Lewis & Clark College, used national polling data to find how willing voters were to elect a politician who identifies as an atheist - knowing that Pete Stark, D-California, has been the only open atheist congressman in the United States. (He lost in 2012.)

The researchers also looked how favorable Hillary Clinton was as a candidate, controlling for whether or not people thought she was religious. The study then compared those data points to how trustworthy voters felt about those candidates.

Clinton was viewed more favorably by voters who thought she was religious, proving their theory that religion helps with a candidate's favorability, the researchers said, Phys.org reported.

"Our findings suggest that not demonstrating religiousness is a significant roadblock for winning public office in the United States, and being perceived as religious increases the level of trust instilled in politicians by voters," Clifford said, Phys.org reported. "For Republicans (showing religiousness) will reinforce their existing support, but Democrats can expand appeal to moderates and conservatives with displays of religiousness."

This isn't exactly a new finding. In 2011, a University of Missouri study found that religious beliefs tend to influence people at the polls. The researchers found that religion impacts how people vote and how the political parties themselves present their ideals to the public.

Researchers compared the influence church attendance has on voting to other class matters like income, union membership and education. They then compared this to countries around the world, like Germany and the United Kingdom, and found that Americans still highly value their religious beliefs when they go to the polls.

"The literature indicated that these countries had become more secular, and scholars have said that religious voting 'no longer mattered,' but this study shows that is not the case," researcher Chris Raymond said in a statement. "Regardless of the trends, religiosity remains on par with class issues as far as why people vote. In fact, I argue that religion is No. 2 to social status."

Other research has found that it's not religion itself that influences voters. A 2009 study from Cornell University found that race, class and gender shape one's religious beliefs and how people use those religious beliefs when voting. For example, wealthy and poor Americans both value the "religious tradition and biblical authority" of a candidate, but will support a different party based on their income.

"Religious identity serves as a language of social and political interpretation," Thomas A. Hirschl, a Cornell professor and author of the study, said in a statement. "But this interpretation depends upon the material circumstance of the interpreter."

This hasn't stopped candidates from relying on religion to help them sway voters, especially in the 2016 campaign, Kenneth T. Walsh wrote for U.S. News and World Report. This was especially true in the beginning of the campaign, when presidential hopefuls Donald Trump, Jeb Bush and Ben Carson would often talk about how their own faiths - Presbyterian, Catholic and Seventh-day Adventist, respectively - influenced their feelings about the country.

These candidates used their beliefs to influence Christian voters to help with their campaign, too, the U.S. News and World report explained.

"GOP candidates are using religion to motivate such conservative Christians to volunteer, contribute financially and cast their ballots for them on Election Day."

And that's fine for the American people. As CNN reported in 2014, a study from the Pew Research Forum's Religion and Public Life Project found that the majority of Americans - about 72 percent - feel religion's affect on public life is dropping, but they don't want it to.

"A growing share of the American public wants religion to play a role in U.S. politics," the Pew study said. 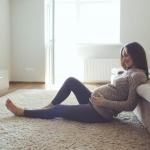 How Much I've Gained After Two Pregnancies