Nine-year-old boy makes more than $1,000 at his lemonade stand; then the police show up

Like Many Young Children, This Boy Decided to Start a Lemonade Stand, But He Had No Idea It Would End Up Like This.

Nine-year-old Angel Reyes could have spent his spring break riding his bike or playing video games, but that wasn't what he had in mind.

Reyes' grandfather, 52-year-old Richard Sanchez, was diagnosed with colon and rectal cancer in December 2016, and by February 2017, it had developed to stage three.

Reyes decided to open a lemonade stand to raise money for his grandfather's treatment. With help from his mother and uncle, Reyes created a big yellow stand with the words "Angel's Lemonade" and "Grandpa's Cancer Fund" painted in bold black letters.

On March 21, Angel's Lemonade was in business.

My 9 year old son Angel is determined to do something to help his Grandpa who was recently diagnosed with stage 3 colon cancer. My lil man has the heart of a real Angel!

Word about the stand spread through Facebook, a Go Fund Me page and word of mouth.

The price is 50 cents a cup, but people have often paid much more. Some even donated without purchasing a drink.

Thank you!!!!
Looks like a couple people came by last night and left this for ANGEL under a rock! My heart is so full of joy!

By day three Reyes' lemonade stand was starting to gain a lot of attention.

He received a $1,000 check from Cancer Aid Resource & Education, Inc. (CARE) to use for his grandfather's treatment. Another nine-year-old boy, Zane Silva, presented the check to Reyes.

His overwhelmingly sweet emotional reaction gives away how grateful he feels.

Then the police showed up

Reyes had so much success that the Las Cruces Police Department showed up to give him a permit in order to keep his business going. Of course they bought some lemonade, too.

Angel Reyes, 9, is spending his spring break raising money for his grandfather, 52-year-old Richard Sanchez of Albuquerque, who was recently diagnosed with Stage 3 colon cancer and is now unable to work.

Reyes set a rather modest goal of raising $100 to help is ailing grandfather. That goal has easily been surpassed but Reyes is still working hard to help a loved family member.

The Las Cruces police and fire departments have tremendous respect for Reyes and wish him and his grandfather nothing but the best. Angel Reyes is another great example of what makes Las Cruces great.

"The Las Cruces police and fire departments have tremendous respect for Reyes and wish him and his grandfather nothing but the best," the police department said in a Facebook post. "Angel Reyes is another great example of what makes Las Cruces great."

Cancer runs in the family

The Sanchez family is no stranger to cancer. This disease is common in their family and took the life of Richard's sister 11 years ago. He tries to be strong, Chasity said, but he is still scared.

Luckily for Richard, he has a hard-working grandchild. But Richard is putting in his fair share of effort, too.

He finished his second round of chemo in March 2017, and Chasity says he is "putting up the big fight."

They didn't expect this much success

Reyes started planning his lemonade stand in December 2016 when his grandpa was diagnosed with cancer. His modest goal was to make about $100.

He blew this goal out of the water. They raised a little over $13,000 just from one day at the lemonade stand and received about $7,000 from their Go Fund Me page as of March 2017.

The lines at his lemonade stand were huge, and the support was overwhelmingly amazing for the Sanchez family.

This is sure to be a spring break the Sanchez family will always remember, but Reyes doesn't plan on stopping there.

"I'll keep doing this as long as I can, if it will help him," he told USA Today. 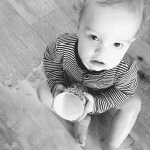 7 Things Your Child Wishes You Would Say…