Olympic Gymnast Shawn Johnson and Her Husband, Former NFL Long Snapper Andrew East, Recently Opened Up About the Couple's Struggle With Miscarriage in an Emotional Video.

Retired Olympic gymnast Shawn Johnson and her husband, former NFL long snapper Andrew East, recently opened up about the couple's struggle with a miscarriage in an emotional video that gained popularity over the weekend.

Johnson posted the video - called "pregnancy + heartbreak" - on her YouTube channel this Saturday. The video shows Johnson and East's initial joy over finding out they're expecting a baby to the sadness they felt when they learned Johnson suffered a miscarriage.

The video has been viewed 1.6 million times on YouTube.

You can watch the entire video - which ESPN described as "raw and incredibly powerful" - here.

The 20-minute video, which was featured on Good Morning America, starts with Johnson discovering her pregnancy, followed by her reaction to the news.

"My instant reaction was to start bawling out of sheer terror," she said. "I'm gonna be a mom. I have a human growing inside of me. What?!"

The video shows East's jubilant reaction to the pregnancy announcement, too, as he opens a package of his favorite shoes (Converse), but for babies, according to The Huffington Post.

But Johnson's story takes a turn for the worse as she reveals she suffered "really bad stomach pains and a lot of bleeding" the day after she announced her pregnancy.

She and East attended a doctor's appointment for blood work and an ultrasound. That's where they learned that Johnson had experienced a miscarriage.

About 10 to 20 percent of pregnancies end in a miscarriage, according to the Mayo Clinic.

But the clinic said the actual number is likely higher than that since "many miscarriages occur so early in pregnancy that a woman doesn't realize she's pregnant."

Johnson, who has often shared uplifting messages about her Christian faith, did offer an inspiring note at the end of the video for herself and anyone experiencing the same emotions.

"The past 48 hours have been some of the happiest, scariest, and saddest times of my life," she wrote. "My husband Andrew and I found out that we were unexpectedly pregnant, only to find out hours later some tragic news. I have been crying more than I ever have, but am still optimistic for what is next." 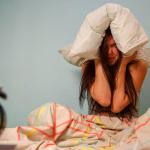 Science Reveals Why 'snoozing' in the Morning is…