One simple way to deflect your child’s tantrums

Here's to something that's better than nothing when a child wants something they can't have.

This article was originally published on The Digital Firehose. It has been republished here with permission.

I've been a dad for more than two years now. I've been learning something new every day from my kids, as they're very good teachers. They don't know that yet, but whenever I learn a new lesson, I take note of it in my morning pages the next day. I have a new one to share with you today, dear reader.

I can't remember when it started, but I have gotten in the habit of offering a hug to my oldest daughter whenever she hurts herself. She'd bump this or scrape that, and if I'm around, I offer a hug. Then she started to take that cue and work it so that if she hurt herself, she'd extend her arms and say, "Hug?" and I'd give her a hug.

Over the last two weeks or so, I've been extending that idea of hugs for other things besides minor bumps and scrapes. My oldest daughter is in the "Terrible Twos" and she has learned the word "No!" She has learned to make demands and requests, though I'm not sure she knows the difference yet. She will protest mightily if she doesn't get what she wants sometimes. This is normal in the sense that each episode of drama seems to be a way to check in and see if she can get what she wants. She wants to know if she has traction.

She doesn't like to admit that she can't get what she wants, and she will make a very strenuous effort to avoid such an outcome. To help defuse these bouts of drama, I've been experimenting with a simple way to give her an out. For example, Mommy got a new pair of sunglasses a few days ago. My daughter likes sunglasses, so when she saw the shiny new pair, she insisted on having them. In response, we told her "no."

As she continued to lobby for the sunglasses, I told her, "You can't have the sunglasses. Those are for Mommy and Mommy alone. But you can have a hug." Then I extended my arms as a gesture of an offer. Then she wiped the tears from her face and put her arms up to say, "OK. I'll have a hug." She couldn't get exactly what she wanted, but could still get something else that she wants.

I've been refining this message to say, "No matter what just happened, you can always ask for a hug." The goal here is to give her an out in an untenable situation. Instead of having to admit complete and utter defeat in her quest to get that coveted something she desires, she can surrender that thing with a request for a hug. This way, she still gets the sense of asking for something she wants, and getting it, even if it is not exactly what she wanted a minute or two before. She can surrender without defeat.

Every interaction with a young child registers in the cerebellum. This is one of the oldest parts of the brain, the non-verbal part, the part of the brain that can associate objects with pain and pleasure — without words. It remembers events and experiences long after we have learned language, but before we can use language to articulate what happened. By letting her know that she can always get a hug, she can let go of what she originally wanted, knowing she can have a hug instead. Getting a hug is a far more pleasant memory, and teaches her how to adapt to situations where she can't get what she wants.

I've done a lot of reading on hugs and I have never seen a negative side effect of them in any peer-reviewed study. A 20-second hug can release a nice fat dose of oxytocin, the same hormone that women release when they're dilating just before birth, and after birth for bonding with a baby. Oxytocin is a bonding hormone that we produce to associate and bond with our parents. It's the perfect antidote for envy or just about any one of the other seven deadly sins.

Giving my kids a hug, no matter what, is also a great application of a famous maxim discovered by The Beatles: All you need is love.

Scott is a professional writer and software engineer.
nextarticle 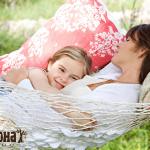 6 Ways to Sneak in 'me' Time Without…