"Isn't It Wonderful That Any Person, at Any Time, Can Decide on Their Own to Make the World a Better Place?

We struck quickly by night, leaving no hint of our identity. We were organized, prepared, and carried out our raids with precision. Our targets never knew who was behind the deeds performed in the dark. We were never caught in the act.

By day, we were good, normal and happy citizens above suspicion.

But when darkness fell, that's when the Chocolate Chip Cookie Phantoms sprung into action. That's when we were at our best.

Okay, this isn't as sinister as it all sounds. In fact, The Phantoms, as we dubbed ourselves, were anything but evil.

Allow me to provide you with the background.

I don't have many talents. I can't sing, draw, change my oil, speak Spanish, and some would say, I don't write all that well. But I make a wicked, slobbery good, goes-straight-to-the-hips, face-melting chocolate chip cookie. In this one small matter, I humbly submit, I excel.

I bake a lot of these other-worldly chocolate chip cookies. So many, in fact, that even my family of six couldn't eat them all. We decided to share with our neighbors, rather than continue down the path of expanding waistbands and visiting the plus-sized parts of department stores.

I can't remember exactly who first suggested it would be fun to drop the cookies on a porch, ring the bell, and run like heck before anyone came to the doorstep. But we all liked the concept.

And so it was, that me and my wife, accompanied by our four children, would fix up a plate of cookies, attach a cryptic note signed only by "The Phantoms" and make our clandestine patrols around the neighborhood in our old blue van.

We got pretty adept at it. Organization was one of our strong points. One or two of the kids would deliver "the goods", another one served as the lookout and the fourth was charged with slamming the van door shut, preferably after all of the siblings were back safely in the car, with no hands and legs left dangling part of the way out. My job was that of the getaway driver, and my wife's role was mainly to fuss over the entire operation.

As I mentioned, we were never caught. Never. Beyond suspicion and reproach. We were that talented.

And we loved bumping into our victims in the neighborhood, at school functions, at church, at the grocery store and never mentioning or even hinting about our surreptitious adventure. At all costs, we protected our anonymity. We kept straight faces. If we were discovered, it wouldn't have been the same.

To this day, I remember the excitement and gales of laughter inside that old van after the raid was over. The kids felt great after a successful mission by The Phantoms. I did, too.

We often hear about the younger generation-the kids, the teens, the twenty-somethings-as being part of a group that only cares about themselves. They're decried as self-absorbed, self-centered, and just about any other word you want to link up to the prefix "self." Part of that may be true, but there are also millions in that generation who love to serve others. Maybe that desire to serve-even far from the light of day-is best inculcated within the home, during the growing-up years.

If your children see you serving others, they'll notice. And the chances are good that they'll see and understand the happiness that service brings to you.

Next, inject some fun into it

Sure, we could have appeared at the doorstep of a family and handed the cookies off, and that would have been fine. Choosing to anonymously drop off the goods at night made it an exhilarating experience for all of us.

Finally, involve your children from start to the end

I admit to gulping-and some of what went down my throat was pride-when I allowed my kids to help make the cookies. But they-the cookies and the kids-seemed to turn out all right. The Phantom experience would have been diminished, I think, if I had made the cookies, selected the families who received them, and organized the approach, drop, and getaway.

Now, the kids are all gone from our home. We donated the old blue van, by then with 170,000 miles (although still running like a champ) to a local charity a few years ago. The lesson stuck. One of our children worked as a volunteer with orphans in Kenya. Another built homes for families in need in Nicaragua. Two others served as missionaries in faraway places. They all seem to have a genuine affinity for helping others, often in anonymous ways.

Did the Chocolate Chip Cookie Phantoms contribute to their outlook about service? Maybe a little. And maybe more than a little.

Since our family has scattered, we've pretty much retired as practicing Chocolate Chip Cookie Phantoms. It wasn't long ago that we heard our doorbell ring and found a plate of cookies waiting for us. No one was in sight. It was a clean getaway. I had to admire the new generation of Phantoms.

The tradition lives on.

Chloe works for Cedar Fort, Inc. whose mission is to gather and develop life-enhancing and inspiring ideas and products.
nextarticle 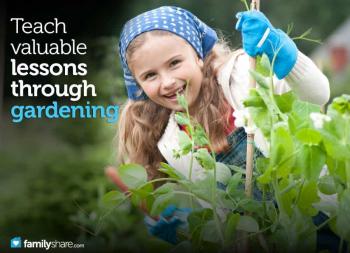 Gardening: an Ongoing Learning Experience That Will Strengthen…