Prince Harry and Meghan Markle ENGAGED! Harry reveals the moment he realized she was ‘the one’

Apparently He Had a Crush on Her For Two Years Before They Ever Met.

Even Prince Harry has a celebrity crush. Two years before he met his now fiance, he was having drinks with a friend who asked who his "ideal girl" was. His answer? "Meghan Markle from 'Suits.'"

The actress and royal eventually met when a mutual friend orchestrated a meeting per Harry's request. Markle was in England to see friend Serena Williams play in Wimbledon, so Harry asked Markus Anderson to set up, not a date, but an informal opportunity to meet and get to know each other. So Anderson planned a get-together of about eight people in a private room of Soho House.

Huge CONGRATULATIONS to Meghan Markle and Prince Harry! They're officially ENGAGED??? Link in bio for details ?

The two hit it off so much that Harry says he knew that Markle was "the one" the "first time we met."

Friends of Markle likewise report that the actress is pretty smitten with her prince.

The two announced their engagement November 27th and will marry Spring 2018. Markle will most likely quit acting when she marries Harry in order to fill her duties as Duchess of Sussex. The couple will live in Nottingham Cottage at Kensington Palace, where Harry currently resides. 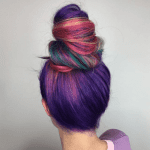 16 Super Easy Hairstyles For Anyone Who Just…