The media can be full of eye-shutting material, learn how to protect your family.

It's happened before, you start the latest movie for kids that just came out on DVD, and everything is popcorn and soda. Suddenly something takes a dark turn for the worst. Immediately, you find yourself covering your child's eyes, with little hands clawing at your hands, fighting your efforts to maintain his or her innocence. What just happened? You ask yourself why was that scene even in a children's movie? The answer: all media is not as it seems.

JoAnn Hibbert Hamilton, author of multiple books relating to strengthening our families against the violence and pornography in the media, explains that the rating system used in the media is used for marketing purposes. Not to protect your children's innocence. She went on to explain how we've all seen the media get more sexually explicit. Here are some of her statistics:

Right about now you're saying, my child would tell me if this had happened. Or, this would never happen in my home. This may not be the case. Children typically feel guilty, and don't tell anyone, fearing they will be in trouble.

So where are your children finding entertainment with violence and sex? Have you looked at the television lately? It's hard to find a single program that doesn't include both. The checkout stand at the supermarket is filled with pictures of women who have been digitally doctored, screaming to your little girl that she is imperfect, or yelling at your little boy that this is the standard of beauty.

Amazingly enough, there are not a lot of studies about how violence and sex in the media affects children. However, media scholars Brad Bushman and Rowell Huesmann (2012) offered their conclusion about the effects of media violence on children:

"Children who watch violent movies and TV or who play violent video games imitate the aggressive scripts they see; become more condoning of violence, start to believe the world is a more hostile place, become emotionally desensitized to violence, and lose empathy for victims. The violence they see justifies to them their own violent acts."

Knowing that the average child watches over four hours of TV a day, seeing over two gun-related violent incidents for every hour watched, how do you even start to protect your children?

Here are some steps provided in JoAnn Hamilton's Podcast:

Get rid of it

Get it out of your home. Check your books, DVDs, music, computer and get rid of anything that could harm your child. Children are smart, even if you hide it, they may find it.

Ensure that viewing occurs only in open areas

Keep your computer and televisions in open areas where anyone can see what is being played. And password protect your computer so your children cannot access it when you're not home.

You can protect them at home, but they need to be educated on how and why to avoid this type of media outside the home.

Shut off and tell

Teach your child that if pornography should pop up on the screen, they should immediately pull the plug on the computer and let an adult know what's happened. Help them understand they should not feel guilty. It is not their fault if it pops up by accident.

Explain to your teenagers and pre-teens how powerful addictions can be, and the consequences associated with them. Addictions can be devastating and can be a battle for the rest of their lives.

Screen what comes into your home

(This applies to cell phone texts as well.) You are the parent, your child may need some privacy as he or she gets older, but there is a difference between privacy and secrecy.

Turn of the TV

Pull out a board game or go for a walk. Give your children family-centered experiences they can cherish and hold on to. Make your home a warm inviting place they want to be in.

Stand up and say something to the manager of the store displaying materials inappropriate to young children. Stand up in your community meetings. Your voice can count, you can make a difference.

You may feel like it's too hard to filter what your children watch. We unplugged our cable television in 1993 in an effort to protect the children in our home from unwanted violence and sex in the media. We made the decision to rent movies, watch selected programs and to simply not have a hundred choices at the touch of a button.

It was an amazing experiment. Almost immediately the atmosphere in our home changed. Even though kids still wrestled and things were still broken, creativity soared. Without prompting, plays were written, cardboard box cities were built and library cards were glued in the backs of books. We got to witness children play together, rather than sit side by side looking at a screen.

Later, for a college class, Shannon needed to hook up the cable for just a few months. Almost immediately she returned home to find teens mesmerized by inappropriate video on a music station. She pulled the plug again and never regretted it. We have not offered any advice we haven't tried and found to be valuable. 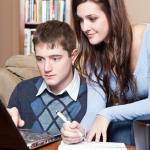 Hey, That's My Money! Getting Used to Sharing…