Girls Are Blasted With a Host of Negative Messages From Peers, Media and Even Themselves. Here Are five Tips to Help You, as a Parent, Raise a Strong and Courageous Daughter.

As a parent of two daughters, I often find myself worrying about how they are growing up. Will they be shy, dependent, insecure women? Will they grow up being dependent on a husband for their identity (e.g. will they be known only as so and so's wife)? Or will they be strong, independent and confident? Thankfully, we live in an era where positive messages about women are as loud as they have ever been. But, unfortunately, there are still plenty of negative messages that are screaming just as loud.

So as a parent in an era where positive and negative messages about women are as strong as ever, what can you do to cut through the negative messages and raise your daughters to be strong, courageous, and independent? Here are five tips I've learned from my years as a marriage and family counselor.

The first thing to do is identify your own beliefs about women's roles and responsibilities so as to make sure you're not perpetuating negative beliefs portrayed in the media or elsewhere. One easy way to do this is to think about your own mother. What did she do? Was she a homemaker, business woman, etc.? What was her role in disciplining the children? What was her role in providing for the family? What messages did you receive from your father about your mother? As you answer these questions, notice how you feel answering them. Do you feel ashamed about certain roles your mother had? Or do you feel good about the things she did? By identifying your own beliefs, you can identify the ones you're teaching to your children (sometimes unintentionally).

Remember, many of your beliefs are unspoken beliefs that you were raised with or learned somewhere along the way. This doesn't mean they're good or bad. But by identifying them and making them explicit, you can more earnestly consider the beliefs you have that are beneficial or negative in raising your daughters. But you can't decide whether they're beneficial or negative until you've earnestly considered them.

Recognize times when during play they demean themselves and their roles as girls, then playfully change that role. For example, next time your daughter plays Princess and is waiting for Prince Charming to rescue her, switch things up so that Prince Charming doesn't end up coming, and she needs to think her way out of her dilemma, herself. Say things like "You don't need Prince Charming to save you. You're strong enough to do it yourself. Now, how do you do that?

3. Be aware of media's influence

Talk openly about movies that you watch with her, or songs she listens to that have girls in it and ask her what she thinks about them. Be specific by asking what she would do differently than the girl in the movie or song. This will help your daughters to recognize that there are other options for girls than just the traditional ones seen in media. This will help them think about what it means to be a girl and what possibilities they have.

Raising strong, independent daughters takes work. But there's nothing more rewarding than seeing a confident daughter with high self-esteem as she works toward achieving her goals. And as she achieves those goals and becomes even stronger and more self-confident, it will perpetuate to her children and children's children. The greatest thought is that you helped her to accomplish that. 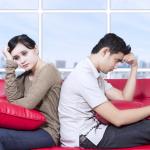 Mind Reading: I Think He Wants a Divorce