Recent Study Reveals That This Sleeping Habit Doubles Your Risk of Delivering a Stillborn Baby: What You Need to Know

Until Recently, No One Realized That This Common Habit Could Hurt Your Baby.

For this reason, researchers have decided to get to the bottom of the mystery in order to save lives. They've uncovered some interesting results.

It's all about the way you sleep

According to recent study by Tommy's Stillbirth Research Centre, researchers estimate that 130 babies could be saved by women changing this one sleeping habit. What do you need to do? Sleep on your side.

The study, published in British Journal of Obstetrics and Gynecology, confirmed what four smaller studies had also found: sleeping on the back is associated with term stillbirth.

The data was based on over 1,000 expecting mothers to learn about the sleeping habits of pregnant women and identify corresponding trends. Both women who delivered live and stillborn babies were interviewed. The results of the study showed that women who sleep on their backs during the third trimester have at least twice the risk of delivering a stillborn child as those who sleep on their left-hand side.

The researchers can't veritably say why back sleeping is connected to stillbirths. However, they hypothesize that laying on the back restricts blood flow to the baby because the weight of the baby and the womb puts pressure on the connecting blood vessels.

What should you do?

Don't be stressed out if you move around in your sleep and wake up on your back. Clinical director at Tommy's Stillbirth Research Centre, Professor Alexander Heazell, who led this study said,"What I don't want is for women to wake up flat on their back and think 'Oh my goodness I've done something awful to my baby.'

"The question that we asked was very specifically what position people went to sleep in and that's important as you spend longer in that position than you do in any other.

How to start sleeping on your side

While further research needs to be done to determine if changing the sleeping position to the side in the third trimester really can prevent stillbirth, you can still put this habit into practice to reduce your possible risk. Here are a few tips to help train your body to sleep on your side. 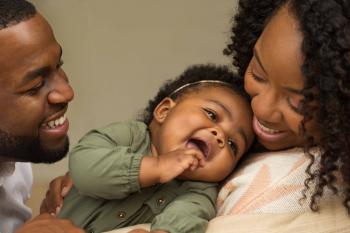 5 Serious Questions to Ask Yourself Before Having…