Leaders from all major world religions met to discuss the need for strong families in modern society.

Religious leaders from a variety of denominations gathered at the Vatican to discuss the role of marriage and family in modern society. The pope welcomed more than 350 guests to

, saying in part, "evidence is mounting that the decline of the marriage culture is associated with increased poverty and a host of other social ills, disproportionately affecting women, children and the elderly. It is always they who suffer the most in this crisis." Following the pope's remarks, speakers including those of the Jewish, Muslim, Jain, Anabaptist, Anglican, Mormon and Buddhist faiths witnessed throughout the remainder of the conference.

The principle theme of the colloquium was society's need for strong families. Rabbi Jonathan Sacks said in his address that the family "is where we learn the delicate choreography of relationship and how to handle the inevitable conflicts within any human group. It is where we first take the risk of giving and receiving love. It is where one generation passes on its values to the next, ensuring the continuity of a civilization." Speakers throughout the three-day conference echoed Sack's sentiments, emphasizing that the best environment for our children is in stable households.

For many, the most remarkable part of this conference is the wide variety of faiths agreeing on the theology surrounding the family. Patrick Fagan, head of the Marriage and Religion Institute in Washington, D.C., told Deseret News that, "The most striking thing to me is the convergence across all religions - not just Christian denominations - that God is most revealed in that complementarity of male and female coming together and completing each other, having to get outside of themselves in order to become whole and in doing that they are actually loving, which is fulfilling God's way, and that way God's way is made known."

Although the participants of the conference come from vastly different backgrounds, representatives from all the major world religions agree that strengthening the family is key to a solid social foundation. Pope Francis continued his opening address, stating "We now live in a culture of the temporary, in which more and more people are simply giving up on marriage as a public commitment." The overarching goal of this conference is finding ways for religious organizations to encourage family life in spite of a society that seeks to undermine family commitments.

A call to all

While the major players of the biggest world religions are meeting, action is not restricted to only the religious elite. Pope Francis reached out to all by saying that today's youth need to become "true revolutionaries seeking true and everlasting love" and "go against the common pattern of our culture that emphasizes the temporary."

In an effort to put the philosophy into practice, the Vatican is also releasing two documentaries highlighting key talking points from this three-day conference. The documentary The Destiny of Humanity: On the Meaning of Marriage speaks to the traditional roles of men and women throughout history. The second documentary, The Cradle of Life and Love: A Mother and Father for the World's Children reaffirms the need for both female and masculine roles in child rearing.

The conference concluded Nov. 19, and a variety of religious leaders spoke throughout the proceedings. The Pope's pro-family agenda will continue into 2015, when the pontiff plans to travel to Philadelphia to attend the World Meeting of Families. 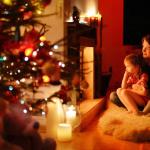 A Happy Christmas on an Empty Wallet