If You've Been Pointing Fingers at Outside Factors or Even Yourself Because Your Child Has Autism, Stop It.

There are a lot of potential reasons swirling around about what causes autism. From toxins in vaccinations to not receiving enough maternal love, the finger-pointing and debate is a pretty hot topic.

But now researchers have a different theory backed up by data.

Past studies, according to Science Alert, "have shown autism spectrum disorder (ASD) tends to cluster in families and is associated with particular genes," meaning the likelihood of having more than one child with ASD is higher because they share similar genes. Researchers now believe that 83 percent of autism cases are hereditary - being passed on through genetics.

Some progress is being made to determine which genes actually cause the neurological differences, but discovering the culprits is a slow process. Science Alert points out that the genes responsible might not actually be found in the parents.

A study found that genetic changes can occur during development in the womb - postzygotic mosaic mutations.

"This initial finding told us that, generally, these mosaic mutations are much more common than previously believed. We thought this might be the tip of a genetic iceberg waiting to be explored," stated Brian O'Roak, a researcher from Oregon Health & Science University.

What is autism spectrum disorder?

"Autism, or autism spectrum disorder, refers to a range of conditions characterized by challenges with social skills, repetitive behaviors, speech and nonverbal communication, as well as by unique strengths and differences," states Autism Speaks.

However, the types of autism vary from person to person. Some people with autism may need a lot of assistance, while others are high functioning.

Autism Speaks also notes that autism is more common in boys than girls, and some people with autism remain nonverbal while some have an intellectual disability. In addition, several medical and mental health issues often occur alongside autism: anxiety, attention deficit and hyperactivity disorder (ADHD), gastrointestinal (GI) disorders, phobias, seizures and sleep disturbances.

Most children aren't diagnosed until ages two to three, when communication is notably lagging behind their peers.

Autism isn't a special need that can be prevented or "fixed" with correct parenting choices. While environment hasn't been completely ruled out, there's no sense in berating yourself for your shortcomings as a parent if your child is on the autism spectrum. Children with autism are unique and interesting human beings. They see the world differently and have a special perspective on the world around them. While some forms of autism may be more severe, there are many resources available to parents to receive knowledge, assistance and even support groups in some areas. 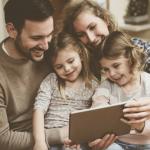 50 Questions You Should Ask Your Kids on…