Volunteers at the Downey Animal Care Center in Downey, California thought Zuzu was just a stray. While outside with volunteers, Zuzu got really excited and went over to some adults on the other side of the fence. A video captured by animal shelter volunteers showed how excited Zuzu was to see these people. It turns out those people were her owners.

But when asked if they were there to take Zuzu home, their answer was no.

Zuzu ended up at the animal shelter after hopping the fence into her neighbor's yard and the owners called animal control. Zuzu had been living at home with her biological father when he passed away. Her owners said she had been sad and cried often since her father died. She was a sad dog and they decided they didn't want her anymore. The owners left without taking Zuzu or any other dog home from the shelter.

The volunteers at the care center shared Zuzu's story on a rescue site known as ShelterMe to help her find a new, forever family. Her story subsequently went viral on social media, and despite Zuzu's family leaving her behind at the shelter, she's being adopted by a rescue.

Shelter dog gets happy ending after old family passes her by

A shelter dog in Downey was excited to see her family, but volunteers learned they didn't want her back. In fact, volunteers said they were there looking for another dog.

But thankfully this story has a happy ending for Zuzu: http://abc7.la/2gNAOus

The volunteers posted an update regarding Zuzu on the Downey Animal Care Center's Facebook page which stated, "We would like to report the happy ending that a rescue has agreed to take Zuzu and she will be leaving Downey on Friday, which is the first day that she is legally allowed to be adopted."

Today Zuzu will find herself a new home.

Unfortunately, Zuzu isn't the only dog with a story of being abandoned by her owners. According to the ASPCA, 7.6 million companion animals are left in shelters each year. 3.9 million are dogs and 3.4 million are cats. Of dogs entering shelters, only 35% get adopted each year and 31% are eventually euthanized.

If you have the capability and resources, consider rescuing a dog or cat like Zuzu. You'll be able to turn an animal's life around and he or she will be yours forever. There's nothing like being able to make a positive difference in an innocent animal's life by giving them a forever home. They'll love you unconditionally for their entire life, which is a reward on its own. 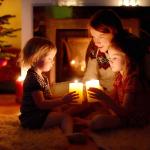 10 Christmas Traditions That Will Bring You Closer…