Try explaining your way out of this one.

Explaining kissing and the concept of acting to children can be challenging, so challenging that you may be left speechless. During a recent Q&A for his latest Netflix film, The Adam Project, Ryan Reynolds was almost left stunned when a young fan asked him about his on-screen kiss with Zoe Saldana.

"In the scene where you were kissing the girl, was that real?" a young fan confidently asked. After gaining laughter from the panel, which featured the cast, Reynolds let out a "Whoa" before Jennifer Garner chimed in, "This is the best Q&A ever."

The actor echoed his co-star's sentiments, adding, "This is the greatest Q&A ever." When the hosts quipped that his wife, Blake Lively, did a great job throwing her voice to ask the question, the 45-year-old actor made sure it was not really her.

"Honey, what the...," he joked.  "I guess it was kinda, kinda real," he said before figuring out the right way to answer the question. "I didn't mean it," he added with a shrug.

He continued, "This is the thing. I don't know how to explain this to my own kids, but they watch this, and they're like, 'Daddy, what are you doing? 'Like it's exactly the tactic I would use on them, not anger but disappointment." "Great question, though; the exit's that way," he joked to the young fan.

In The Adam Project, which also stars Garner, Mark Ruffalo, and Walker Scobell, Reynolds plays a time-traveler who crash-lands in the past and has to turn to his 12-year-old past-self to fix his ship and save the future.

Entertainment Tonight spoke with the actor during the film's premiere, who talked about teaching his and Lively's children how to make the right choices. "I think I would be psychotic if I didn't want my children to at least, you know, try to do something right and with integrity," the father of three said.

"But my kids are 7, 5, and 2, so I'm not like, 'You gotta get better grades!' I mean, I'm just happy if they finished a bowl of cereal," Reynolds added. When it comes to their parenting style, the Free Guy actor joked that it's "probably like a brown belt at this point?" Adding, "I don't know. We're working up the chain of command."

When it comes to the topic of kissing and relationships, every parent will handle the conversation differently. Unfortunately, there's no one way to have that discussion. However, if your kids do start asking, only give them information that's appropriate for their age and try not to overindulge. You may end up like Ryan in this clip. 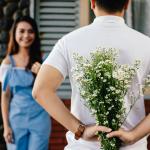 When Your Partner Wants You to Keep Proving…