Save Me! an Alien Took Over My Child’s Personality

Do You Ever Wonder if Aliens Have Taken Over Your Toddler's Body? is Going to the Store Like Going Far Far Away From Sanity? Learn Why Toddlers Tantrum and What to Do About It.

I dressed my toddler like a little lady and took her shopping for a wedding gift in a shop full of glass and crystal. She reached out to touch something sparkly and I panicked, "No! Don't touch!" I said quickly and firmly as I reached for her. SMACK! She threw herself flat on her back on the hard floor. The sound I heard was her curly head hitting the ground like a melon.

She writhed like she was possessed by an alien. Every head in the busy store turned, and when she opened her mouth the sound that came out wasn't human."She does this," I tried to explain to the other shoppers as I scooped her flailing body off the floor and rushed out the door. Within a few minutes the screaming had stopped, her nose was wiped and it was as if the possession by aliens had passed. But, as a mother I now had Post Tantrum Stress Disorder. I was sure the alien was waiting inside my little darling for the next time we were in a public place.

Later, I was able to attend a training on how children's brains develop. I was thrilled to learn that my toddler was normal, not possessed by aliens, and that someday life on my mother ship would return to normal. Here is what I learned. The good news, our children have brains. The bad news is when our children are born their brains are still rapidly developing and will continue to develop as they grow. Being half-baked creates behavior challenges. Each child's brain has:

All of these areas in the brain communicate with each other. When a child enters a full-blown tantrum, communication can shut down between the areas of your child's brain. What does that mean to you? It means that if you are trying to talk and reason with a tantrumming child, it is probably not getting in at all. They may not remember a word you say. Not only are their brains not taking in what you are saying, they probably don't understand how they are feeling or what they are upset about.

Children have fears about the world and what they don't comprehend. They may feel like flushing the toilet is sending away a part of themselves or that when you put on a mask you magically become a monster. Toddlers do not understand "pretend" versus "real."

An article published on Parenting.com called, "Toddler Temper Tantrums" explains what happens in a toddler's brain when they have a full-blown tantrum or alien possession. This feeling of heightened arousal causes the body to release cortisol, known as the "fight or flight" hormone. Maybe it should be called "tantrum juice." Cortisol increases blood pressure, speeds up breathing rates and may lead to confused or unclear thinking. (Sound like anyone you know?) This anxiety is developmentally typical in moderation. So, knowing that your child's brain is having a short meltdown and that during his alien possession he is not thinking clearly, what can you do to comfort and help your child?

Howcast video, "How to deal with a screaming child while shopping,"gives excellent step-by-step instructions for handling your own shopping alien invasion. Finally, if you have Post Tantrum Stress Disorder, remember this will pass. As children grow older, are better able to communicate and have further brain development, the tantrums will end. Or at least you will get a break until it is time for them to borrow the keys to your car. 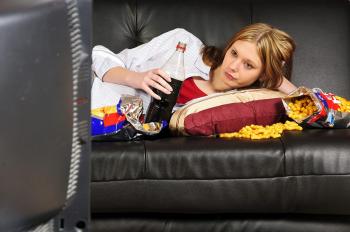