She was pronounced brain dead, but what happened next will shock you

Lexi Hansen is a living miracle.

On February 26, 2014, Lexi Hansen, then an 18-year-old freshman at Brigham Young University in Provo, Utah, was riding her longboard on campus. Suddenly, Lexi was struck by a car and suffered a severe brain injury. Lexi arrived at a nearby hospital in critical condition, was pronounced brain dead at the scene and was given less than a 1 percent chance of survival.

Lexi's family created a Facebook page entitled "Pray For Lexi" that described Lexi's severe condition and called for thousands of friends and strangers to send prayers in her behalf. A week later, Lexi's family surrounded her hospital bed while singing hymns, and despite the many odds that were against her, she woke up.

Lexi's story is a miracle. God is truly aware of all of his children and their circumstances. Through faith in him, miracles and endless light can be brought into the dimmest parts of our lives. 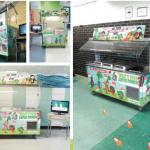 How Superheroes Can Encourage Your Child to Eat…