Why is it so important to respect men, their role in our lives and the fathers who teach and raise us?

We live in a time when the battle of the genders is commonplace and belittling the opposite sex is the thing to do. It's good for grins and chuckles. It is the hot topic for movies, television shows and novels. Which gender is stronger, smarter, funnier, more likely to succeed?

Most relationships cannot withstand too much of this. Such disrespect erodes the well-being and security of partners until there is no equality.

As women, we sometimes demand respect from men, while at the same time, laughing amongst ourselves at their inadequacies and shortcomings. This not only can drive a wedge in our relationships, it can begin to feel true and our respect for men diminishes.

It is difficult to stand your ground when you are in a group of women who like to man-bash. They may love their men, but their cruel jokes might begin to ring true and before you know it, doubt creeps in and along with it a feeling of gender superiority.

The problem with disrespecting men is that there are so many good ones out there. People's shortcomings don't have so much to do with gender as they do other influences, like upbringing, circle of friends, education, culture and the media.

Here are some good reasons to show more respect for men:

These are male figures we owe everything to. To belittle men in general is to belittle them. Think of all that they have done for you in your life and give a nod to the men who are created in their image.

I sometimes feel so sorry for men simply because of the mixed signals we send them. We want them to open doors, but we can open our own. We don't need them, but we do when our tires need changed. It has to be confusing being a man and I think this is another big reason we should give them respect. Most of them are willing to be what we want them to be, if we could just figure out what we want.

We wouldn't be here without men

It takes men and women to make children. That's the long and the short of it. Our very existence is due to a man. Whether or not they are or were an integral part of our lives, they got us here. We owe our lives to them.

Good relationships seem to depend on one partner balancing out the other. Finding the ying to our yang is the trick. When we do find him, we need to make sure to give him the respect he deserves for giving us equilibrium.

How we treat the men in our lives is an example to others, particularly children. They watch how we treat men and how we speak about them. Unless we want to raise man-haters, we should keep our actions and words respectful for the men who have influence on our lives, whether it is our husband, partner, boyfriend, father or brother. I once had to dismiss a party of women at my home because they were man-bashing and I could see the distress it was causing my son. I could not subject him to it. As Frederick Douglass so wisely put it, "It is easier to build strong children than to repair broken men."

No matter if a man has broken your heart, his behavior is based on his character and not on his gender. Men are good. Women are good. Together they can do much good. A little respect goes a long, long way.

Men are divine in nature, just as women are. We need to remember that and always respect manhood. 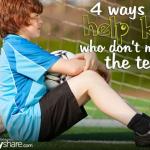