If Your Methods of Discipline and Punishment Have Lost Their Effectiveness, Here Are Some Suggestions For Coming Up With Creative Consequences For Discipline.

Have you fallen into a parenting rut? Do you find yourself saying "Time out" or "You're grounded" so often, you sound like a broken record? Here are some suggestions for coming up with creative consequences for discipline.

You probably already know some of the behavior problems you are going to encounter. Try coming up with some creative ideas during the calm before the storm. That way, you will be prepared when you need to act.

Not that great at thinking on your feet? Don't worry, you don't have to come up with consequences right away. When your daughter is misbehaving, simply say, "There will be consequences." You can decide on the specifics later. Just be sure to not wait too long. Consequences are more effective when they closely follow the behavior.

Catch your child being good

Your son is acting out because he wants something - your attention, to win an argument with his brother or to play without interruption. Identify what he is trying to accomplish and then try to identify an acceptable way to accomplish it.

Focus on the behavior you want to teach

Consequences don't have to look like consequences. Try using funny voices or an exaggerated response. Talk to an imaginary "referee." Humor helps to distract from unwanted behavior and lower the emotional thermometer.

Remember when you warned your child, "There will be consequences?" No one said you need to stop at just one. If the first consequence isn't successful, add another. You can keep adding consequences until you have found the "sweet spot," the point where the discomfort of the consequence is greater than the reward of not complying.

Allow your children to experience natural consequences when possible

Is your son slow in the morning? Being late to school might mean a lunch detention later. Does your daughter skip her homework? Then she might have to go to study hall, or her grades may suffer. Remember, you do not need to pile on additional consequences if your child has already been punished at school. Instead, offer suggestions for solving the problem, and remember to praise her efforts to improve and enjoy successes.

God wants you to be a successful parent. You may have a limited number of ideas, but He doesn't. When you consistently pray for help, you will find thoughts coming into your mind that will help you find the right consequences for each situation.

Do you still need help to get the creativity rolling? Here are some examples of creative consequences.

One young mother noticed her boys were fighting more than usual. She wanted to encourage kinder feelings towards each other, so she introduced the Forgiveness Bench. The two boys sat side by side, holding hands, while they came up with three nice things to say about the other.

The alien inside your child

Another mother had trouble with her daughter whining. She wanted to teach her to use her big girl voice. Whenever her daughter started to whine, she would say, "Oh, no! An alien got inside you and is making your voice sound funny. Here, spit him out, fast! OK, there, let's see if he's gone. Can you tell me again, in your big girl voice now?"

One mother struggled with her son disobeying her. She would ask him to do something, and he'd answer, "No!" Finally, she told him that if he said "No" to her, then he would get a No Day, and she'd say "No" to him. After saying no to his request to have a friend over, to watch TV, and to have a cookie, he discovered that he didn't like the No Day at all and decided to be more obedient.

Another mother had an artistic young daughter who sometimes left her coloring books to color on the walls. She took her daughter's favorite coloring book and scribbled on a page in pencil. When her daughter became upset, she made a deal with her - she'd clean up the coloring book if her daughter cleaned up the wall. After the clean up, she let her daughter draw chalk pictures on the sidewalk, and she taped some butcher paper to a wall in the bedroom as a safe place for her daughter to draw.

I think you've got the idea. Now, tap into your own creativity, and I bet your parenting will become not only more effective, but more enjoyable as well. 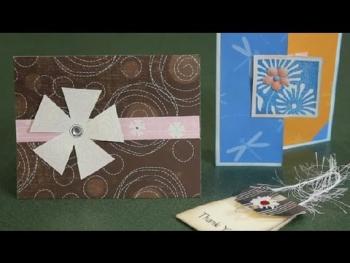 How to Write a Thank-You Note