Summer fun: 10 outdoor games that keep kids on the move

There are some old school outdoor games that you might not have considered. All require a little equipment, but the investment is worth it when you see the fun you'll have as a family.

Summertime is the time to get moving. It is also a time to relax and socialize. Here are 10 games to help your family get moving as well as de-stress and bond:

Croquet is a very social sport that can be played with 2-6 players - depending on your set. This is a game that your family will probably love, so you might consider investing in a quality set. It is played with wooden mallets (golf club length), wooden balls, wickets (a kind of wire hoop fastened to the ground) and a post at each end of the course. I spent hours playing this game as a child but don't see much of it today. In its early days, it was designed so that women in long dresses could play along with men. It is a relaxing outdoor game, but can get a little competitive with the right players.

Played with a net similar to volleyball or tennis, this game is played with rackets and shuttlecocks (birdies) which are volleyed back and forth. You can play singles or doubles. We always played in teams. Just be careful you don't bean someone with your racket.

This is a pretty popular game that is played with teams that volley a ball over a net. Loads of fun and can be played on the beach or in the yard. Or, if you're so fortunate, in your yard which is also a beach. But I digress. Equipment is a net, poles and a good volleyball. This game is hours of family fun.

Any number of players can play. Two stakes are posted at each end of the pit. Players stand at one end and pitch their horseshoes at the stake at the other end, trying to ring it. Each player tosses two horseshoes per turn and 3 points are awarded for each ringer and one point for being within a horseshoe's width of the ringer if no one gets a ringer.

Good old fashioned disc throwing. Can be played as keep away, thrown in circles, thrown to dogs (dogs must be sporting a neck bandana in order to qualify ... OK, not really), distance challenge, or make up your own games. The most fun you can have with a piece of plastic.

This was a very popular playground game when I was growing up. Simple chalk squares are drawn and a playground ball is used. This game is for four or more players and is a lot of fun. The object is to swat the ball from the square to square of your choice without landing it outside the square. Players who fail to keep it within the square are either eliminated (if there are more than four players) or moved back to the first square (if there are only four players).

Bean bag toss games are easy to make yourself. They can be in a variety of configurations and are great fun for little children to play. You can decorate (or have your kids decorate) a piece of cardboard and then cut holes in them large enough for the bean bag to go through. You can draw figures on the sidewalk and have them toss bean bags into the figures for fun or points. You can use a box with holes cut into it. Bean bags can be sewn or you can just fill a sock with a cup or so of beans or rice and then tie it at the top.

This is the perfect solution for bored teenagers as it can be practiced solo or played with friends. There are loads of games that can be played with this little foot bag. To get them more interested and involved, have them make their own hacky sack.

OK, this one isn't so much old school, but it is loads of fun. Many communities actually have courses set up. Check with your parks and recreation department to see if there is a course near you. If not, consider setting one up. Various sizes and weights of Frisbee-like discs are carried in over the shoulder golf bags and thrown to hit basket targets. This is a game of precision and concentration, but not nearly as expensive as traditional golf. You can set this game up in wooded areas, parks, and open clearings.

This game is played with eight bowling balls and one target ball, called a pallino. It's kind of a cross between shuffleboard and croquet, where you try to get your ball closest to the pallino, move the pallino closer to your ball or try to move your opponent's ball away from the pallino. Loads of fun for teams of one-four players.

Pick a few of these and add to your sports equipment inventory each summer. These are great ways to get your kids out of the house, get them active and encourage them to bond as a family. 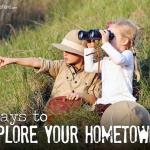 6 Ways to Explore Your Hometown