It Takes Just a Simple Moment to Teach Children About the Power of Prayer.

Editor's note: This article was originally published on Hilary Erickson's blog, Pulling Curls. It has been republished here with permission.

You can talk until you are blue in the face to you kids about how prayer works.

But it just takes a simple moment ".

A few weeks ago, Princess P left her lunchbox on the school bus. Now, drama-rama is the code name for our house in the afternoons already. We weren't even into double digits for how many days of Kindergarten she has been to. I do believe this was day eight. Anyway, she is having a tough transition, and the thought that her beloved lunchbox may never return to her lovin' arms was too much for her to take.

Mr. Middle suggested that she pray that she'll see it again. Maybe the school bus driver will just hold it for her.

And like she does, she immediately said a prayer. Right at the kitchen table, in the middle of her after school snack.

Life went on. I soothed her fears and said life would go on, with or without a lunchbox. She tried to believe me.

And then there was a knock at the door. Who could it be? We don't get a lot of early afternoon visitors "

And there she was, the bus driver. With her bus parked in our coul-de-sac, handing us Paige's lunchbox.

I was shocked. I had no words. I called Paige to the door to say thank you. She did, in her shy way. We also made a Thank You card for her, since that was truly going above and beyond. How she knew our address, or why she decided to be our knight in shining armor, I'll never know.

I just know a 5-year-old girl asked her Heavenly Father to please bring it back to her.

The lesson comes in finding the correlation. Was it a coincidence that it happened? I guess some might say it is. But I believe God is listening. He hears our prayers and he very much wants to give us what we are asking for. If we just believe.

Hilary is a very part time nurse, and a very full time mom. She loves her faith, her family and her blog. The order depends on the day. You can find her at her blog, Pulling Curls or subscribe to Pulling Curls Direct.
nextarticle 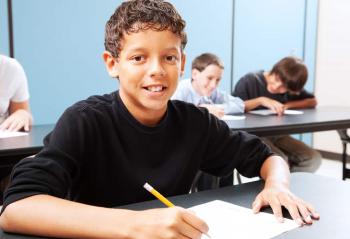