Teaching Children to Be Church Mice in the Chapel

Taking Small Children to Church Can Be a Daunting Task For Any Parent. Here Are a Few Tips For Teaching Your Children to Sit Quietly During the Service.

Church. For a parent with young children, the word may bring to my mind visions of temper tantrums, Cheerios thrown into the adjacent pew, and, "I have to go potty," screamed at the wrong moment. Yet, those of us who want our children to be honest, upright citizens often make a weekly pilgrimage to a religious service.

When my children were young, I knew that each Sunday I would spend only a few minutes in the chapel until one of my boys acted up and then I would be forced to make a hasty retreat. After many missed meetings (and nearly wanting to give up on Church myself), my husband and I finally decided to ask families with well-behaved children for tips on instilling reverence and respect. Following are some of the ideas we gleaned for teaching children to be church mice in the chapel.

Sit in the front

We noticed several changes right away. The first change was in us. We were less likely to take our children out of church when they acted up because we didn't want to make the long journey back through the chapel. Instead, we endured their sudden outbursts of noise or bad behavior. When the children realized we weren't leaving as readily, the bad moments passed and they quieted down. The second change was in our children. With the podium right in front, they were much more attentive because they could see everything. And, there were no misbehaving children in front of us to imitate.

It is now our regular practice to sit in the front at any event we go to. It's an act of courage with young children, but it's definitely worth the risk.

Initially, I always took a large bag full of treats, books and toys to church. Whenever the children became restless, I would pull a magical "something" out of the bag to keep them quiet for a few more minutes. Soon, however, I noticed that each week they wanted activities bigger and better than the week before. Each Sunday I tried to think of a cool "surprise" I could pull from the bag right at their worst moment to distract them. Then I realized I was playing their game. They expected me to entertain them!

One week, my husband and I decided to leave the diaper bag at home. Guess what? We survived! Our children realized we were not going to entertain them, so they spent their time looking around the chapel or (hooray!) at the speaker. I was amazed how much more relaxed I felt when I didn't feel the pressure of entertaining my children. Now we let our children bring scriptures and a pencil to church. When they feel bored they mark their scriptures - a good alternative to treats and toys. And, except for a chew toy for the baby and a quiet book for our toddler, our diaper bag is just that - a diaper bag!

While Sunday attire has become more and more a thing of the past, it is still helpful to maintain your own family Sabbath dress code. While this may not be the traditional Sunday hats of yesteryear, requiring best dress of your children (button-up shirts and ties for boys, dresses or skirts for girls) will naturally remind children that church is a place for our best behavior.

One Sunday, it occurred to me that perhaps my children couldn't sit quietly at church because I never expected them to do it at home. I decided that a few practice sessions would be helpful. Each day that week I set the timer for 15 minutes and told the children we were "pretending" to be at church. Then we sat on the couch, reading scripture readers. I demonstrated the behavior I wanted them to portray. I even put on soft church music to listen to. The children loved it! Not only did they learn to sit still, it gave both them and me confidence that they could sit reverently when they wanted to. I knew I could expect it of them at church, because they were reverent at home.

If you do have a young infant who must be taken out of church often, take turns with your spouse. At least every other week you should have a few reflective moments to yourself during the service.

Most parenting problems solve themselves as children grow and mature. Much of the misbehavior children display at church is a result of their age. Don't despair! Children grow and soon have the ability to understand and display reverence.

Parents may naturally struggle more with their first children as they establish a family standard for reverence. Be consistent with your expectations, and soon older children will model the correct behavior for church, and younger children will easily follow their siblings' examples. These ideas have worked for us and our growing family. And, I have even had moments of pleasant surprise when my children comment, "Guess what I learned at church today!"

Nettie Francis is the mother of nine children. She has written on topics pertaining to children and families for the past 20 years. Her work has appeared in national and international publications. She blogs at fromthefrancisfarm.blogspot.com
nextarticle 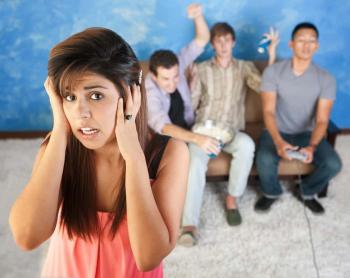 5 Ways to Cope With Your Spouse's Friends