Teenage angst or ADD? How to tell the difference

A teenager's troublesome behavior could be more than a problematic attitude. Children with ADD often exhibit behaviors that are out of their control.

Teenage angst or ADD? How to tell the difference

On a busy Saturday morning, I asked my 16-year-old daughter to help me with some of the items on my "To Do" list. One of her tasks was to call the pharmacy's automated refill number and follow the steps to order some prescriptions. This was a seemingly simple process that I had done numerous times. However, she became frustrated in her attempt to do it, slammed the phone on the counter, and stormed off. We've had these episodes before which usually ended up in a yelling match and me thinking that she's just a self-centered teenager.

At age 9, my daughter was diagnosed with ADD (Attention Deficit Disorder), so I devoted the next several years to helping her with school-related tasks so she could build strong academic skills. Unfortunately, I ignored many of the other characteristics associated with ADD. When she exhibited these characteristics as she got older, I passed them off as common adolescent behaviors - and dished out a lot of punishments. I chose harsh discipline instead of trying to understand and properly deal with her actions. In other words, I took the wrong approach.

When she became a teenager, her anger issues got progressively worse. That's when I decided to learn as much as I could about ADD so I could apply more effective parenting practices. I soon discovered that trying to learn everything about ADD is equivalent to trying to sip every ounce of water from an Olympic-sized swimming pool with a soda straw.

My education about ADD is an ongoing process, but I'm happy to say that I have learned how to better assess whether my daughter's behavior is typical teenage attitude, or a coping mechanism in dealing with symptoms of ADD. Fortunately, we are now better able to defuse potentially explosive situations. The following are ideas for how to handle common ADD-induced behaviors in teenagers.

Statistically, 1 in every 10 children struggle with symptoms of ADD and many are not properly diagnosed. ADD is a complex disorder that manifests itself in different ways at different times throughout a child's life. There is still so much medical experts don't know about the disorder. Nevertheless, it's a good idea to learn as much as you can about the disorder, especially if your child has been diagnosed. This will help you make better educated assessments of your child's behavior. There are numerous resources available about the topic, but don't allow yourself to be overwhelmed with the amount of information out there. Start by deciding on a particular topic or characteristic and research only that topic. Otherwise, you'll get bombarded with information which will slow your progress. If you think your child might have ADD, the best place to start is to see your family's healthcare provider. Your family physician will likely refer you to someone who specializes in the disorder. A good place to start your research on the topic is the Children and Adults with Attention Deficit/Hyperactivity Disorder (CHADD) website.

When your child exhibits problematic behavior, out of reflex, you might immediately impose a punishment. (Some misbehavior still does require immediate action.) When the situation is feasible, instead of reacting to your child's behavior try to observe what triggered the action.

According to Thomas E. Brown, Ph.D. assistant clinical professor of Psychiatry at Yale University School of Medicine, many with ADD experience a flood of emotion in their mind. This overwhelming intensity can cause an individual to lose perspective. During this time, rational thinking is often displaced, overlooked, or ignored. (CHADD Parent to Parent, 2008)

In the case of my daughter's frustration, I discovered that she has difficulty with trying new things - especially when other people are around. She also struggles in situations where she is pressured to think something through, plan ahead, or make immediate decisions. I have since learned that it's best to give her advanced notice about situations that she will need to think about and make a decision. I will tell her that she needs to decide on a certain course of action and that she must come up with some ideas for a discussion that we will have at a specific time in the future. It's important to establish a specific time for the discussion; otherwise, she will forget about it.

Help your child identify his or her behavior

While some behaviors merit punishment, others might be out of your child's control. Instead of chastising your child for acting out, have him or her help assess the situation. For example, you could say, "this is how you reacted just now, why do you think you did that?" Many times, they will respond with, "I don't know." (Most of the time, they genuinely don't know what brought about the behavior). When you can help your child identify what is going on in his or her head or around them when they exhibit certain behaviors, over time they might be able to resolve the issue on their own as they mature.

Effective parenting requires parents to be observant, knowledgeable, and patient with their children's behaviors, especially if they have ADD. It's better to determine the root of behavioral issues and deal with them at that level instead of focusing on errant behaviors. 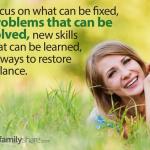 When Life is Driving You Crazy. Here Are…