Do your children want to sit in front of a screen all day? Discover what would happen if you let them.

If you're a parent in today's world, you're probably worried about how much time your children spend in front of a screen.

I remember hearing when my son was born that babies aren't supposed to have any screen time before they are 2. That seemed impossible since there are screens everywhere, but I decided I was going to limit his screen time as much as possible.

But then reality hit. And despite my efforts, my now-18-month-old begs to watch videos and has already figured out how to open my iPad, find the Netflix app and put a show on for himself. He'd watch shows all day if I let him. And he's not alone. Surveys found that 2 out of 3 babies and 4 out of 5 toddlers watch TV, movies or online videos and that 90 percent of 2-year-olds have some proficiency in using a mobile device.

So what really is the big deal? Why is there so much concern about children and screen time? What would actually happen if you let your baby or toddler sit in front of a screen all day? Here are some major concerns.

Children who spend significant amounts of time in front of a screen have a smaller vocabulary and learn to talk later than children who have little or no screen time. Small children need someone to talk with face-to-face and plenty of time to experiment with their own voices in order to learn to speak. Sitting in front of a screen doesn't provide these opportunities.

Children who spend significant amounts of time watching TV are more likely to be overweight than children who don't. Consuming various forms of media can prevent children from the physical activity they need. And while there is no link between media consumption and decreased activity in babies and toddlers, the habits those small children develop now may continue as they grow older.

Babies and toddlers need interaction with other people for healthy brain growth. If you've ever watched children in front of a screen, there is often a blank zombie-like expression on their faces. Even if there are people on the screen, the kids aren't learning how to interact and to respond like they would face-to-face with a live person. These interactions help with developing social, emotional and cognitive skills. When the TV or another screen is on, parents and children interact less, denying opportunities to develop these vital skills.

Watching too much television has also been linked to shorter attention spans. One study even found the more screen time a child had between ages 1 and 3, the harder time he or she had focusing at age 7.

Screen time can also be detrimental for your child's sleep. Watching TV can interrupt a child's sleep schedule, and the light emitted from a device can delay the release of melatonin, making it harder to fall asleep. It's also possible for even young children to have nightmares from something they watched.

So what do you do if your child under 2 has spent time in front of a screen? First, relax. It's not the end of the world.

In fact, the American Academy of Pediatrics recently announced it will be revising its guidelines about screen time. They have acknowledged that the guideline for no screen time for children under 2 and only 1-2 hours for older children may be outdated and unrealistic. Reports say the new guidelines will recommend quality over quantity. They will also encourage co-viewing with young children since the biggest dangers come when a baby or toddler is simply plopped down alone in front of a video.

Another thing to consider is that the old recommendations were made before tablets and smartphones existed, so they were based mostly on television viewing. There's not as much research about the effects of newer devices; but, once again, quality content and moderation are key. The good news about mobile devices is they can be more interactive than just staring at a screen. And if the only thing your child is doing with them is video chatting with family, then you don't need to be worried at all since there is plenty of face-to-face interaction going on.

So what can you do? You can set limits like allowing only a certain amount of time per day or week with screens. You can create media-free zones in your home. Also, ensure the media consumed is quality content. Co-view with your children and help them interact by asking questions, pointing things out and discussing what they saw when it's over. And when it comes to mobile devices, look for age-appropriate apps that are also educational.

Bottom line? It may be okay for your baby or toddler to have some screen time, but don't overdo it, and make sure there is plenty of time for more interactive activities. 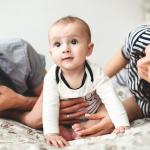 Expanding Your Family? How to Baby-Proof Your Marriage