The Argument For Imagination

Try to Imagine a World Without Child-Like Imagination.

I went to the educational toy store to buy some Christmas gifts for my children. I was specifically looking for a set called Toobers and Zots. Maybe I shouldn't endorse products, but here goes: Only one of the most amazing toys on the market and specifically engineered toward children's imagination. Toobers and Zots are little soft foam cut-outs that a child can use to make anything from a jeweled crown to a dinosaur. I had seen them before and wanted to get a large set for my kids to play with. Another mother saw me pick up the package and picked one up herself. She looked at the clear plastic cylinder that contained the parts and got a distressed look on her face.

"There's no instructions. How are my kids supposed to know what to do with them?"

I managed to hide my mournful sobbing until I got to the restroom. That's all I remember until a sales clerk found me huddled in a corner of the stall mindlessly chanting, "Tchaikovsky, Einstein, Dickens, Tolkien, Rembrandt ..."

She soothed me with a cup of chamomile and together we tried to console ourselves with a lot of shoulder-patting and "There, there's!"

Eventually the lovely clerk's patience wore thin and I was politely checked out and shuffled on. I drove, bleary-eyed, toward home where imagination ran rampant and was often manifested in a somewhat disheveled house arrayed with scientific experiments in mad laboratories also known as kitchens and excavation tents built over sofas.

I had a similar experience when I was reading to pre-school children. I loved doing that. More than the reading, I loved watching their faces as they listened to and really experienced the story. Then one day, one of the little boys chimed in, "You know that caterpillars can't really talk."

(Sound of a phonograph needle scratching a 33 rpm.)

"Caterpillars may communicate, but they can't really talk to human beings."

His delivery of this dream-shattering news was cold and pragmatic. With a lump in my throat and tears filling my eyes, I finished the story brimming with disillusionment.

The pain of these and other similar traumas still lingers, but all I can do is counteract such ignorance with a messier house full of wild things and their fruitful imaginations.

I try to imagine a world where Mozart's mother said, "Put those notes in order, they are a mess!" or Rembrandt's mother scolded, "I told you to color inside the lines!" or Newton's mother told him, "Stay out of the orchard!"

Let your children's imaginations run wild. Let cardboard boxes become space ships. Let egg cartons start an apple orchard. Let lipstick become a bathroom mirror mural and flour and eggs and licorice become a new souffle recipe. Most of all, accept that imagination is messy and exciting and critical to the soul of children and the enjoyment of all of humanity. So, put on that bath towel cape and run wild with the other super heroes in your house. 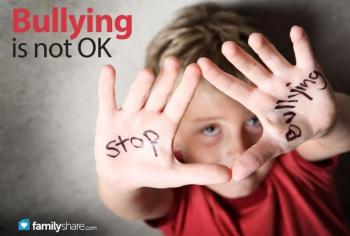 Help! My Child is a Bully