The Blessing of Watching My Father Serve

The Best Way to Teach Your Children to Serve is by Example. Here is the Story of How My Father Changed My Life by Teaching Me How to Serve.

When I was young, I was extremely lazy. I hated the nickname I was given, "Bare minimum Ben," because it constantly reminded me that I didn't understand the value of work. But if you were to know me today, you wouldn't have guessed it. As I have pondered about the change of heart, I realize that it can be directly attributed to the inspiration I received while watching my dad serve others.

In the story of the Good Samaritan, a man was robbed, wounded and left for dead on the side of a busy road. A priest and a Levite crossed to the other side of the street to pass by him, as if the distance would somehow make it seem as if they didn't see him in the first place and would absolve them from any guilt. They were either too busy or didn't want to dirty their hands.

Then a Samaritan stopped to help, even though there was no obligation to do so. He bound the wounds of the man because it was the right thing to do. He took him to an inn to recuperate because by serving this man, he was serving God. When I think of this man, I can't help but think of my dad.

One night as we were driving home from the store after a big windstorm, we drove by the house of a woman we visited often in our church congregation. A large tree branch had fallen on her garage and smaller tree limbs completely covered her driveway. I saw it but didn't say anything because I was looking forward to getting home for dinner. But before I knew it, my dad whipped the van around on the busy road we were on and pulled in front of her house. We spent the next hour moving the fallen branches away from the driveway so she would have somewhere to park when she got home.

A week later when we visited her again, she told us about the act of service and said it must have been her landlord. She was extremely grateful for it, but she never found out who really did it. That experience changed my life. My dad could have done the same thing I wanted to do - avert his eyes and pass by "on the other side." The landlord could have taken care of it, but my dad took the time to teach me a lesson.

I also remember other times my dad had me join him in serving others - shoveling snow for the single women living across the street, picking ice away from driveways after a deep freeze so people could get out of their driveways and helping people move. None of these were obligations, just an opportunity for my dad to show me the joy of serving others for the reason that by doing so, we were serving God.

But he didn't do it just to teach me. He did it because, like the Samaritan, "he had compassion." Many of the people we served together were single women or the elderly - people who may have been able to do the work themselves, but it would have been much more taxing than for us to do it.

Through those experiences, his compassion infected me. As I grew older, I had opportunities to serve on my own. I looked for them and gratefully lent a hand. I was not longer "Bare minimum Ben." In 2009, I even had the opportunity to go to Fiji for six weeks with a non-profit organization to work in some of the villages there. Although it cost me a few thousand dollars and I almost lost my job because of it, I knew it was the right thing to do because that was what my father would do. 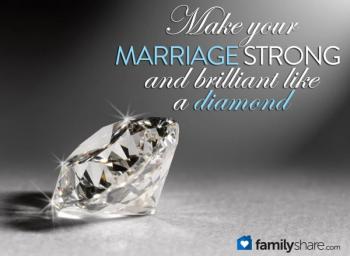 A Marriage as Strong as a Diamond