The Dangers of Pornography: 4 Ways to Talk to Your Children

Parents Might Feel Their Children Are Safe With Guards on Cable Tv and the Internet But Pornography Can Seep in Other Ways and Damage is Done. Learn How to Deal With This Poison by Talking With Your Children.

Pornography is a poison so strong it can cause even the very best of our generation to become monsters. Inappropriate pictures and visuals are everywhere in media. They pop up in TV commercials, magazine ads, movies and especially on the Internet.

David Kuplian says in The Marketing of Evil, "By all accounts, Internet pornography has become a genuine national epidemic, ensnaring millions of people who never had a pornography problem before." This horrible attack on the human race has reached into many religious homes without parents even becoming aware of this terror. Families need to stop this dead in its tracks. Here are four tips to help:

: Teach modest dress as soon as children are able to pick out their own clothes. Talk about appropriate behaviors from the time children are young. If both parents are in agreement of what is appropriate, guidelines can be set to help children and teens dress to keep themselves away from temptations. Open conversations about modesty and keeping private areas private should be discussed with children under 10 and young teens. Children will understand exactly where parents stand in these areas and, over time children will feel more comfortable talking about it.

: It will be difficult for some parents to establish an open ongoing conversation about inappropriate sexual behavior, but this is a must if parents want to save their children from watching pornography.

Establish a regular habit of taking with children civilly. No one wants a yelling match over uncomfortable topics. If children are comfortable talking about uncomfortable things, then parents can check in with the child every so often about experiences the child is having.

Children want their parents to listen to them. Open discussions are a great way to build trust between parent and child. One important topic to teach children is that sexual relations are best when saved for marriage. Be blunt, but calm.

Talk to your kids about what kind of websites they follow. The movies and television shows kids watch are also very important. If parents can keep the reins on entertainment, this will help children deal with what is appropriate and what is not.

A study done by P. Romito & L Beltramini in 2011 on gender differences in watching pornography and violence reported, "In a sample of 303 students (49.2 percent female) a questionnaire included questions on pornography exposure, psychological and physical family violence, and sexual violence. Almost all male students and 67 percent of female students had watched pornography; 42 percent and 32 percent, respectively, had watched violence against women."

The evidences are there in studies. The importance of parents checking their children's computer time is imperative. Slumber parties and children spending too much time alone together is very dangerous to the welfare of children and their chances of inappropriate behavior are much higher.

: Teens who are happy in life and have a positive attitude will shine but those teens with sudden mood swings and changed outlooks from happy to sad or extreme anxiety need talk time. The red flags are waving when parents see a big mood swing lasting over months. This includes changes in activity from a child being friendly and happy to spending too much time alone in his room. Talk time is very important in finding out what caused the behavior change. There is a good chance teens are crying out for help in a way they understand, but parents might not catch unless the topic is brought up in conversation.

Our society isn't just hiding Playboy magazines under the bed. Pornography is out in the open for everyone and anyone to watch. It has become a poisonous part of our society and it is very important for parents to talk with their children openly about it. This is an ongoing process and, as parents, we can help children steer away from dangerous situations. Appropriate conversations with children from a young age all the way through late teens can save families from heartache and sadness. 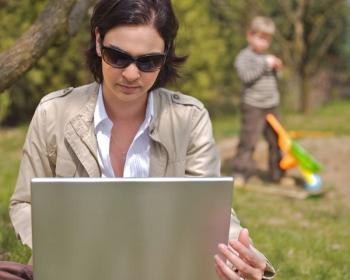 7 Signs You're Missing Out on Your Kids'…