The end of the world: Helping your teenager through a breakup

Do you remember your first boyfriend or girlfriend, when life was grand and you were sitting on cloud nine? The rush of excitement every time you saw them was undeniable, and you boasted about how happy you were? Now, do you remember your first breakup? You wanted to rewind the conversation or fight you had; you wanted to go and relive the past. I know I did, wondering where it all went wrong.

When your teenager enters a more serious relationship, it can be a rollercoaster of emotions. The distractions, the constant talking about their relationship, and the happy dance of joy is evident. You might be happy for her, and even be tempted to give your advice. You love that your teen is happy and want that happiness to last; however, most likely, it won't. And when the breakup happens, it can devastate her.

Here are six tips to help your teenager get through a first breakup.

She has lost someone special in her life, it's only natural for her to grieve a while. Having a shoulder to cry on or a listening ear might be all she needs - but be aware, it may not be from you, and that's OK.

If he doesn't want to talk about it, don't force him. He will usually know when he's gotten over it, but don't rush him. Let him work out his own feelings, without harping on him, or trying to fix it. If he comes to you, great, but allow him to steer the ship.

Be there for her

Sometimes, the reassurance from mom or dad that it will be ok is enough to help your teenager deal with a breakup; other times, she may want to drown her sorrows in a bowl of ice cream. Join in with your own, but again, let her do the talking. If she just cries, be her shoulder to cry on.

Don't allow him to wallow

If it's been only a week, maybe he's not ready to accept the breakup, but if it's been longer than a month, that could be too long. If his emotions take control and school work is suffering, or he's sleeping a lot, this is a sign of depression and needs to be addressed by his doctor - especially if he exhibit signs of suicide, such as hopeless talk, withdrawal, fantasizing about death, or attempts at suicide.

Talk to her friends

What better way for a teen to get over a breakup than to hang with her friends. If you have a good relationship with your teen's friends, talk to them; ask them to do something with your teen, a night-out at the movies, laser tag, a shopping spree at the mall, or maybe just a talk.

Get him dating again

The best tip in getting over a first breakup is to get back out there again. Encourage your teen to continue dating, assuring him that there are other fish in the sea to pursue, and that this experience will help him learn and grow.

Before you know it, your teen will resume normal life, and you will cheer her on to the next phase of her life, having experienced and come through her first breakup. 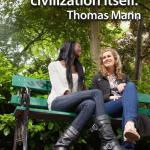 Sometimes It's What You Say and How You…