The power of mothers is the greatest power on earth for good, at Christmas time and all throughout the year.

Once upon a time, as all tales begin, there lived a noble man and his princess fair. They lived together in great love, and beauty marked their way. For everywhere they went, the lives of those around them improved and great light and joy surrounded them everywhere they went, for they were so caring and so kind that the angels of their God could not be restrained from their company each day.

To this blessed couple came a daughter who personified the love of God in every way. Her eyes reflected the very light of God, and she shared his love with everyone she met. This family did bless the earth, and many years later people still remembered them for their good deeds.

One Christmas Eve, as they were ministering unto the humble poor, a beggar child came their way and offered up his cup. Seeing his poor state, the family asked him of his circumstances. He confided that his mother was quite ill, and through the streets he took them to her bedside. Indeed she was so pale in the candlelight that they hardly dared make a sound. The urchin told them how she worked so hard to keep a crust of bread within their hands, but the coldness could not be kept out. It finally took its toll and now she lay quite still, ravaged by the winds of poverty and dearth. But, the grace of God was on her still, and when she saw her boy her face lit up, a heavenly glow of love that filled the room.

For love knows no death, no poverty of soul. Love is the greatest force in life and works more miracles than all the gold on earth. Love is what makes the universe go 'round, and all the stars hang in their place. For it is with love that all life abounds and lives are brought to bear and become all that they were meant to be.

Through a mother's love, she saw greatness in her boy, though barren of the most meager trappings of that kind. He stood there with feet so bare, and ragged were his clothes that no one looking on would suspect a king most fair. But in her eyes, he was all that for he held the love that her poor life was bereft of in all other aspects. He was her world. She loved him so, and he returned the adoration so full that beside these two, there was no other love that matched the depth, the grandeur, the devotion of two lives. Their hearts bespoke the other's worth and nothing in the world mirrored these two souls and what they meant to one another, the mother and son. They were everything to one another, the sun, the moon, the stars and everything that's fine within mankind.

Now, with the life-flame low, she languished so forlorn that not much hope was left for her survival on this night.

The family of God had arrived just in time to put to rest the fears of each one there. The father strong and tall, wrapped the boy's mother in his arms and lifted her, as if she were a shadow, from her bed. He carried her to quarters warm and soft where she could rest and receive the nourishment so needed for her life, and there she convalesced and received the strength that only sacrifice from others can engender in a life. For sacrifice far more than bread gives to life its sustenance and strength and bids it to go on from day to day when all else is lost. For giving unto others of our love doth create the nobility of life intended for us all.

Day by day, she and the lad gained stamina from the tender care of those nearby who saw to their every need. The pair grew in strength, and as their faculties returned it was discovered that she was an artist rare, and thus supplied she filled the world with beauty and great light. The love now shown made every dream come true, and she became all that she was ever meant to be, and her gifts filled the world and hung in the palaces of kings.

For each life holds a gift, something it alone can give, to make the world a better place and bear for all mankind the gift of love from God who placed it there to uplift the human race and bless each soul who stands in need along our way. And evermore, the love of God intertwines to bless one another and exemplify the one true light that came to earth to give the world his love and bless everyone who gathers close to see that Jesus Christ, the light and life of all mankind doth bless us everyone to become like the Son of God. He shows us the way as he personified the life well spent helping others on his way.

What of the little son? He, through his mother's love and the example of the strangers who took the time to care, went on to light the world ablaze as fevered brows and trembling hands were comforted, as lives replete with God's great gifts were restored and edified to become all that they were meant to be. For, we are all connected by God's grace and every life that touches ours receives a gift from us. As we offer those gifts to all the world, the world becomes the place it was meant to be, by its creator, through his love.

Shelly Locke graduated in Social Work and Family and Human Development. She is the author of Cherish the Children, a book honoring the irreplaceable significance of Motherhood. She is the founder of The Power of Mothers, a global organization dedicated to the value of Motherhood at www.thepowerofmothers.com
nextarticle 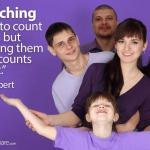 How to Be the Best Aunt or Uncle…