The Morning God Kissed My Wife

One Small Act Toward My Wife Made All the Difference.

Editor's note: This article was originally published on Jason Young's blog. It has been republished here with permission.

My wife, Stacy, and I had one of those days. You know those days you get easily agitated with the other person and argue about stuff that really is unimportant. Yep, we had a day of it.

We went to bed at about the same time, and did so without talking. Shows you my level of spiritual leadership. Not! It is called being stubborn.

I got up before her the next morning. I showered, got dressed, grabbed my bag, and headed to the door. Normally, I gently touch her arm to let her know I am leaving. However, on this morning I was still thinking about the day before and did not even want to do that. God put a stop to it. As I walked past her, he said to me, "Go back and not only gently touch her arm, but gently kiss her forehead." Honestly, I did not want to. Just keeping it real. I kissed her forehead and left.

A few nights ago, Stacy got quiet and told me something that was beautiful. She referenced the kiss from last week, and then told me about a conversation she recently had with God about how that particular day was full of blunders on her part. She felt down and defeated, struggling to receive forgiveness, not feeling loved, and a little distant from God.

It was that next morning that God said to gently kiss her forehead.

She told me that I had never kissed her like that. She said it was like a father kissing his daughter. She said she felt God kissing her and reminding her of his love and forgiveness.

"You were the physical tool God used to show that he heard my prayer and loves me, and it happened that way because you chose to obey even when you didn't feel like it."

Jason Young cares for guests and builds teams as the Director of Guest Services for North Point Ministries, where he and a lot of volunteers work hard to create experiences people love. He also loves reading and spending time with his wife and two children. Jason lives in Atlanta, GA.
nextarticle 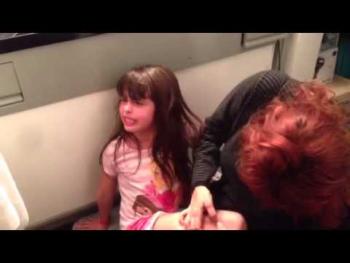 Removing a Splinter Has Never Been so Dramatic