The one thing parents don’t need to stress about

Forget attempts to make picture-perfect memories. Often the mistakes or the unexpected are hilarious and what kids remember best.

This article was originally published on Psychology Today. It has been republished here with permission.

As parents, we strive to create a backlog of heartwarming memories that our children can look back on fondly. In today's fast-paced and often competitive world, this leads some on a quest to provide more and more for their children, at times spending an exorbitant amount of money or time to embark on over-the-top vacations or shower children with pricey toys and gifts.

Because children are unique memory keepers it is near impossible to predict exactly what will catch a child's fancy and stick in his memory. Siblings often recall situations and events differently, and some may not remember them at all. Children frequently forgot what parents fretted over and thought was a peak experience or major event.

A series of studies by Harvard Business School published in Psychological Science not only revealed that we often underestimate how interesting it is to recall past events, but also the pleasure of remembering seemingly ordinary events.

In one study, a group of 106 undergraduate students were asked to list items like recent conversations they had with a friend, memories of a social event, and songs they were currently listening to as a sort of "time capsule" capturing their everyday life. Researchers "sealed" the time capsule and asked participants to rate how interesting they thought they would find each item to be months later. After months had passed, the students opened the capsule and rated the items again; they found that surprisingly, they were significantly more interested and curious about the items than they thought they would be. Even though many events were relatively mundane, the participants took pleasure in reliving the experience.

In another in the series of studies, pairs of romantic partners were asked to list some of the conversations or evenings they had one week before Valentine's Day, and rate the memories from "ordinary" to "extraordinary." They were also asked to rate the evening spent on Valentine's Day. A few months later, they were asked to rate the experiences again. Interestingly, participants found they were much more interested in recalling the more mundane evening together than the special Valentine's date.

The researchers concluded, "that individuals underestimate the future value of rediscovering today's seemingly mundane experiences." Something parents frequently do when they try to orchestrate exceptional or unusual experiences for their children. They underestimate the impact of the simple things they do with their children, especially things that seem commonplace or unexciting.

8 Ways to Embrace the Ordinary

These findings underscore a significant fact about family life: Time spent together - even for a few minutes throughout a day - can be enough for parents to create special ties to and long-lasting memories for and with their children.

Here are eight ideas to help today's time-strapped parents make the most of the mundane by starting traditions and making memories without "going to extremes."

Designate a handy chair or step near the door for tying shoelaces, securing Velcro closures, or pulling on boots. Call it the "shoe store" and invite your children in. This will speed up getting ready and they will remember it as going to the "shoe store."

Initiate a wake-up routine: several kisses, a stuffed animal search, two hugs, a parent singing a made-up alarm song, or sending the dog to jump on your child's bed.

After dinner turn on some music and dance with your children for a few minutes.

Ask your child to join you for a "cup" of coffee or tea. Dilute with milk and add a touch of sugar, according to age.

Meatless Mondays, Fishy Fridays, or Kid-Choice Wednesdays. Naming the meal day tells children what is for dinner and becomes a unique part of growing up in your family.

Ask your child to keep you company when you fold laundry or wrap presents, when you write notes or are just relaxing. Ask him just to be there with you.

Discuss a current event nightly or once a week. Select topics of interest to children: record-breaking sales for a toy, an outstanding athletic performance, a medical discovery, or an ecological advance.

Have a quick bedtime ceremony even if it's only a certain way of puffing the pillow or patting your child's head. Fly a blanket in the air in the fanciful style of a magician before it lands on the bed; tuck the top sheet a unique way.

Susan Newman, Ph.D., is a social psychologist and author. Her latest book is The Case for the Only Child: Your Essential Guide.
nextarticle 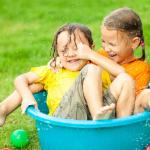 3 Keys to a Great Family Reunion