The Power of Positive Expectations

As Parents We May Unintentionally Label Our Children. Not That We Mean To, or Want To. We Do the Best Job We Can With What We Know at the Time. No One Loves Our Children More Than We Do, But Do We Unknowingly Create Low Expectations?

The phone call came from my son's principal. Alex had only been in kindergarten a few weeks, so I was surprised to be getting a call from his school. Unfortunately, I was not nearly as surprised as I was about to be. My gentle giant had gotten into a fight on the playground with a third grader. From that point forward, teachers expected trouble from Alex, and they often got it.

Unfortunately, negative expectations don't just happen in schools. As parents, we may unwittingly label our own children. It's not that we mean to do this. We do the best job we can with what we know. Surely, no one loves our children more than we do, but sometimes we may unknowingly create low expectations.

"She's always been shy," I heard one mother say about her now 21-year-old daughter.

"She has no ambition, but look at her grandmother. 'The apple doesn't fall far from the tree."'

All too often, rather than our children and grandchildren believing that undesirable behavior comes from outside themselves, they simply come to believe that this negative picture others have painted of them is who they are: lazy, irresponsible, shy, or misbehaved. It's so much harder to change who we believe ourselves to be than to change how we behave. Precious children may begin to live down to our expectations of them.

The summer before Alex entered second grade we enrolled him in a new school. We had long talks about fresh starts and new beginnings. Alex was now a clean slate to which no chalk had yet been applied. There were no more fights on the playground. No more trouble at school. Alex's old behavior no longer dictated who he was. Now, he was defined by the positive expectations of others.

What steps might we take in our homes to turn around any negative expectations we have of our children? How can we rewrite the story of who they believe themselves to be?

1. Sit down together as parents and make a list of each of your children's positive traits. Write separate lists and then compare.

2. Ask grandparents, aunts, uncles, and siblings to participate, remembering that you're looking only for strengths, not weaknesses.

3. Lastly ask your child how she sees her best self.

Compile all of these positive perceptions. How do they differ? Then ask yourself, "How can we, as a family, build on the strengths of each member?" It is so much easier to increase appropriate behavior than it is to eliminate destructive behavior.

Your new, positive expectations of your child's behavior will likely take several months to gel. There will be many slips on both sides of the equation. Don't give up. Be patient. The results may amaze you. 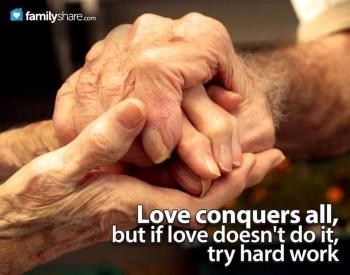 Marriage: How to Hold on Through the Hard…