How Does God Expect Me to Keep Doing This Every Day?

The Real Deal takes a look into the lives of the joys and struggles of real parents. This week FamilyShare interviewed Cami Lish. If you would like to be considered for a feature on The Real Deal, tell us your story here.

Q. What is one of the hardest moments you've dealt with as a parent?

I think being a parent is made up of a million "hard" moments that you forget about as soon as they pass.

That being said, I'll never forget the one time I really wanted to throw in the towel. Emi was seven or eight-months-old and the world's worst sleeper. It was bad!

She didn't just wake up once or twice a night, it was four or five times every single night.

We were both grumpy, sleep deprived and in need of a really big hug and box of chocolates!

On this day, I was trying for the third or fourth time to get her down for a nap and she would not settle in. I remember thinking, "How does God expect me to keep doing this every day?!" I was so overwhelmed. Thankfully, my husband was coming home early that day and as soon as he walked in the door, I grabbed my keys and took off to get a soda. Cliché, right? The poor girl [at the soda stand] helping me must have thought I had lost my mind!

My hair was in a days-old messy bun, I was still in my pajamas and I had mascara literally from my forehead to my chin. To top it off, I had forgotten my wallet and was trying to pay for my drink with the spare change I found in my car.

I was like 40 cents short and she said to me, "It's OK, you can just have it." It was completely embarrassing, but kind of a godsend that got me through that awful day.

A few weeks ago Emi was looking in the mirror and told me she was a "pretty girl." #momwin ?? She also thinks every color is green and that the baby is growing in my chest.... I'm choosing to focus on the positive. #positiveparenting #selflove #shessoconfusedaboutcolors

Q. What is a sweet moment you've had with your children (or just one individually) lately?

Emi has been so sweet lately. Maybe she can tell we're having another baby soon, but she's become so snuggly. My favorite moment lately was when she climbed up on my lap and out of nowhere said, "Mom, I happy." It made my heart want to explode.

She's obsessed with "chocky milk", calls my robe a "fwike", and loves to "snug" the kitty. I seriously like her so much. â¤ï¸ #lifewithemiline #thedelisheslife

If you would like to be considered for a feature on The Real Deal, tell us your story here. 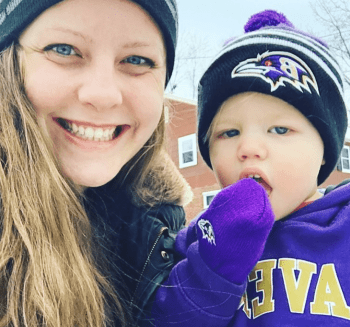 11 Adorable Snapchats That Will Make Your Husband…